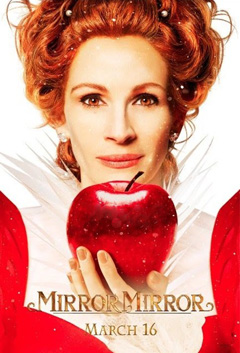 We all know the story… Evil Queen, who’s really kind of a witch, wants to be the most beautiful of all the kingdom, so she asks, “Mirror mirror on the wall who’s the fairest of them all?” And she is, until Snow White becomes the fairest… so she decides to kill her.

Add to that Tarsem Singh’s visuals, zany dialogue and situations, and you got something fresh. When Julia Roberts as the sickly sweet Evil Queen — remember how sweetly sick Umbridge was described in Order of the Phoenix? — tells us this is not Snow White’s story. All of our focus immediately shifts from Lily Collins to Julia Roberts because, certainly, she’s hilarious in here. Loud in colors, histrionic, and quite campy. Her Evil Queen shines the most when she’s interacting with her not-minions, especially Nathan Lane, who plays her aid, Brighton.

There was a grasshopper joke in there somewhere, but I’m not sure since I saw it in a Latino dub. Now, I’m usually really bothered with dubbed films, but in here, the comical side of things shone through that dubbing. It was either really great voice-acting, or the humor translated really well. Having said that, I can’t wait to watch Mirror Mirror in its original English audio.

Now, I’m not saying that Lily Collins is a weak lead. I actually think she did fairly fine in her scenes with the dwarves, which were equally as entertaining — and generally more like Girl Power than just lamenting on how her people were starving. In the meantime, people who watch a lot of television would be familiar with Mark Povinelli (Half Pint), Danny Woodburn (Grimm), and Martin Klebba (Butcher) — and really, Peter Dinklage was missing, but he’s kicking all sorts of butt in Game of Thrones.

My only complaint with Mirror Mirror is the pacing. Singh had a really dynamic idea going on, and he worked great with his cast and crew to keep the humor (and some action) going, but it seemed like he didn’t know when to cut the scene to leave you laughing. One scene immediately comes to mind: the slapping of Prince Charming. Everyone went at it, leaving poor Armie Hammer acting like a puppy for more than we wanted to care for.

Some interesting things to point out, while we’re building new female archetypes on our fairy tales, the princes are having it rough. Think about Prince Edward in Enchanted.