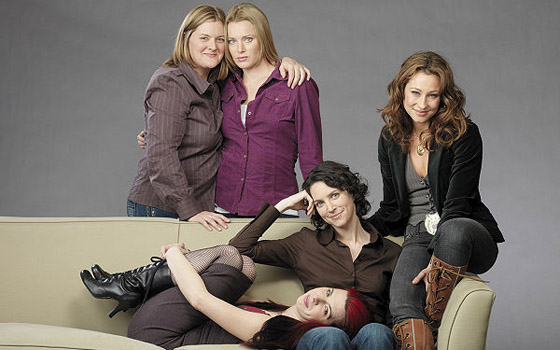 There is something exceedingly normal about Exes & Ohs in that it is a sitcom that revolves around a lesbian group of friends. It is more in the vain of Friends than The L Word, and it’s refreshing. The show isn’t about the sex between the characters, it isn’t about their relationship with sex, but just about their relationships and the problems that arise from being a lesbian whose ex-girlfriend is now her best friend.

One would never know lesbian relationships could get so complicated.

Exes & Ohs is the story of Jennifer (Michelle Paradise), a sort of quirky indie documentary director whose on the rocks relationship comes crashing down when she discovers her then girlfriend frolicking with their therapist. A year later, her now ex is about to marry said doctor, and Jennifer is not moving on.

Jennifer’s best friend, Sam (Marnie Alton), used to date Jennifer but now is a free agent, roaming the field for potential casual lays and avoiding any sign of commitment. Jennifer, on the other hand, values relationships and can fall in love at the drop of a dime. She is awkward, rambles a lot and even has those time-stopping moments in which she addresses us to explain the finest bits of lesbian interaction, which come in handy for those of us not “in the know”. Her relationship with “best friend not girlfriend” Sam is interesting and still worth exploring in a Season 2 — which still stands in broadcasting limbo.

The cast is rounded out with lesbian perennial couple Kris (Angela Featherstone) and Chris (Megan Cavanagh) — with almost matching names, and sometimes matching outfits, which is scary — and the young lesbian Crutch (Heather Matarazzo). Kris and Chris are an awkward couple that bring in some laughs, but are pretty cliché. We love Heather Matarazzo a lot, but her character is just terribly annoying. The good thing is that the show’s first season is only six episodes long. Though there are obvious budget constrains, Michelle Paradise, who’s in charge of the whole operation, does her best to use resources. The show looks independent, away from the glossy high production that we’ve come to grow accustomed to from big television networks, but still feels cozy.

Exes & Ohs’ only mainstream pro and con would be sex appeal — a con because it stops a huge chunk of people from actually giving the show a try because they don’t see enough beautifully glossy people, but a pro because you can actually sit through the show with your family without feeling terribly awkward — has any of you really seen The L Word with your parents? Yeah, we didn’t think so.

You can get it on Amazon.com