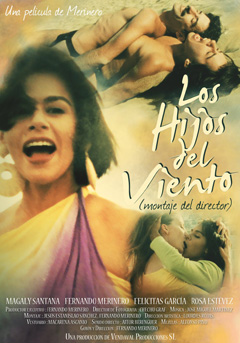 Los Hijos del Viento — translating to The Children of the Wind — is a surprising film by Fernando Merinero who also stars side by side with his leading lady.

The film begins with Fernando arriving to the Canary Islands, leaving behind his wife (whom he didn’t get along any longer) and his kid in Madrid, in search of Magaly, a free-spirited Cuban living in the islands. She is, for the most part, a lesbian or at least attracted to women most of the time, though she does establish links with men that place Magaly more in the sexually-fluid territory.

She has a complex relationship with one of the women that work at the iffy nightclub she handles, as well as being free to “love” some of the other complicated women she surrounds herself with, always avoiding people who try to get too close… which includes Fernando, who is constantly pinning over her.

Despite all the rough edges on Los Hijos del Viento, which includes the dated look on the film — now 16 years old — and some of the most sexually graphic scenes (so you prudes, you can stay away), the film is about a lonely woman that’s trying to pass as this strong and independent one. Magaly, and her complicated relationship with people, is what holds the film together and keeps you watching her journey as she tries to escape being too entangled.

The exploration of her life without really showing us through flashbacks, instead taking us through an emotional journey with those familiar talks about a life that she used to have — familiar to those who’ve lived or are living in places they have yet called home — and the people she used to have around, in the end revealing a soul that lost a part of itself and is trying to never forget, as well as never truly reminding herself.

If you understand Spanish, you can give Los Hijos del Viento a look on MUBI.
[No subtitles available yet]