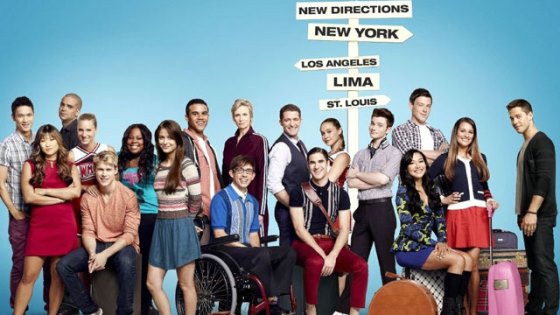 I actually watched Season 4 and I had no intentions of talking about it at all until I read that Glee is ending after Season 6 due to an unfortunate event [1] that has affected the whole show and it’s currently taking its effect on Season 5. I might as well go ahead and finish the entire series because I tend to complete tv series viewings for the most part.

Regardless of how much Season 3 sucked, Glee should have ended its run after its penultimate episode. At that point, Mr. Schue (Morrison) finally accomplished the initial goal he had set for New Directions and it was more than enough to end the show on a good note (in terms of the main goal) after most of the boring, offensive and preachy storylines along with the few highlights that the audience had to endure. Instead, the Season 3 finale used Rachel Berry (Michele) to set up Season 4 and split the storytelling into two places: New York — where Rachel studies at NYADA — and Lima, where New Directions works to repeat its recent success.

Back in Ohio, New Directions gains new blood to replace those who left after graduating last year. Last year’s Nationals MVP Wade/Unique Adams (Alex Newell) joins the club, but we also get new folks and storylines that were seen before in Glee: Kitty (Becca Tobin) is like a mash-up of Quinn and Santana, Ryder (Blake Jenner) is a nicer version of Finn, Marley (Melissa Benoist) is an agrresive-less Rachel and Jake (Jacob Artist) happens to be Puck’s (Mark Salling) half-brother, but he’s half-Puck and half-Finn as a character.

Out of the new characters, only Kitty and Jake were sort-of interesting to watch, individually. Unique and Ryder were forgettable to me and Marley was severely misplaced in the “Rachel Berry” position for the Ohio storylines, and it got worse when the writers shoved her into your face and did everything they could to make you root for her: being a broke bulimic girl with an “I’m a virgin” complex, having a obese mom (Trisha Rae Stahl) working at the school’s cafeteria who does her hardest to help her out and getting “bad guy” Jake as a boyfriend. Watching Marley’s storylines felt forced, unlike Kitty’s road from bitch to sweet girl.

In terms of recycled storylines, the love rectangle with Kitty/Jacob/Marley/Ryder played out similarly to Quinn/Puck/Rachel/Finn in Season 1, but the execution was lifeless for the most part. Then, we had transgender character Wade/Unique tackling Kurt’s storyline about acceptance while Marley’s mom was a Burt Hummel riff, Blaine got Finn’d up [read: leader and dull goofball/asshole character] and Finn (Cory Monteith) played as Will during the first half of the season and coached ND until he’s departed to NY because Rachel’s there and shoving Finchel in our faces is (or was) one of Glee‘s top priorties.

The rest of the Ohio folks? Sam (Chord Overstreet) is bros with Blaine and he’s dating Brittany (Heather Morris), who tries to live in a Santana-less world, Will and Emma’s (Jayma Mays) road to marriage is rough and Tina (Jenna Ushkowitz) finally gets a lot more of screentime as a queen bee which had both hit [see: funny and bitchy lines] and miss [see: crushing on Blaine] moments.

At New York, Rachel does her best to impress singing teacher Carmen Tibideaux (Goldberg) and dancing teacher Cassandra July (Hudson), but the latter makes her life a living hell. Later on, old and new characters appear into New York as we see Kurt (Colfer) and Santana (Rivera) living with Rachel at her apartment while new people enter their lives: Kurt deals with fashion mentor Isabelle (Parker) and Adam (Oliver Kieran Jones — you’ve seen him on Episodes [1][2] before), who crushes on him while Rachel has an affair with fellow NYADA student Brody (Dean Geyer).

Out of the new characters, only Parker, Goldberg and Jones fared well and the rest were pretty annoying and/or boring to watch, especially Geyer’s Brody who is somehow worse than Finn and sucked the life out of the show. I felt kind of bad for the Adam character because his existence suffered because Klaine is a powerful couple (sadly) and the writers pander to their fans unfortunately. Adam was actually a nicer and more likeable character than Blaine, who was made to be a creepy douchebag this season. And yes, Jones is more talented than Criss as an actor (he has regressed since his debut in Season 2).

New York is pretty much a more exciting place than Lima, but that’s not saying much. While it seemed inevitable for Lima to host repetitive storylines, New York had the cooler original characters to its advantage in one of the world’s best cities. However, Glee wants you to care equally about what happens in both NY and Lima which led to abrupt shifting between both cities and it got tiring as the season went on and by the end of the season I cared less about both cities and most of its characters almost equally. Who gives a damn about Lima when ND already won Nationals during last season and most of the original members graduated? The next logical step was the post-HS life, but Glee also wants to keep Will, Sue (Lynch) and the other non-graduates [see: Blaine] and the newbies [see: Marley] on the screen as well as making former graduates doing cameos in both cities. You just can’t have it both ways unless you plan it out well, Glee.

Overall, Season 4 was less offensive (yet slightly more boring) to watch than the aggresively offensive Season 3. I have some mild morbid interest in Season 5 considering one of its major characters is gone forever. Somehow, I expect Season 5 to be equal or worse than Glee‘s latest outings.