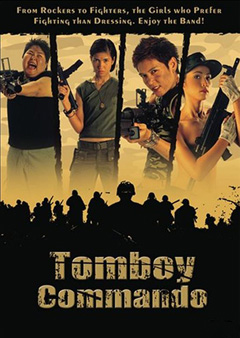 This is one of those films I find difficult to talk about. Thai names confuse me a LOT, so I really have no idea (and no way to confirm) the name of the actresses nor the name of the characters they’re playing. However, with a name like Tomboy Commando, how could I refuse a watch?

The film follows this group of tomboy girls who play in a rock band at this dingy pub that no one seems to like. One night, the boyish leader of the band (maybe it’s Crystal?) is in the women’s bathroom, when two flamboyant kathoey [1] mistaken her for a guy and tell her to go to the men’s bathroom. After a rather awkward (and a bit sad) exchange of words, in which they tell her that she may act like a man, but she can’t pee standing up, she has this wise exchange of words with her friends:

It’s not fair. When a man wants to be a woman, he can. But why can’t we act like men?

That’s the line that struck me the most culturally different — is Thailand really that different from the rest of the world? Because we’ve often hear about how it’s socially acceptable for women to be pant-wearing strong and independent (except when they have too much power, in which case people turn towards the word “b!tch”), while men adopting feminine characteristics is often regarded as weak and as a joke.

From then on, Tomboy Commando takes some trippy turns, when the ghost of an old woman — who calls herself a lesbian pioneer — gives the girls a map where the leader will find a substance known as “licholim” that will turn her into a real man. By chance, really, they embark on a journey in search of the magical herb-root-thingy, in which they will meet a Thai insurgency group that will take them hostage and even a tribe of little people, and a mysterious group of man-devouring (really big) women.

It’s really REALLY weird funny. The closest comparison to it would be the genre D.E.B.S, which wasn’t all about the lesbian loving, but about the spy organization in search of that very hot Jordana Brewster. In Tomboy Commando, though, it really isn’t about the fist-pumping action scenes — our tomboys, sadly, aren’t really all that rocking. They try to be, but surprisingly, the little butt-kicking that goes around is handed out by the most femme of the tomboys, which I thought was kinda great. Though she’s singled out and treated like damsel in distress by much of the film, she escapes the title and saves herself A LOT.

If Tomboy Commando had better production quality and more budget, it could have been a pretty great flick. Though, as it stands, it works as a decent Z movie.