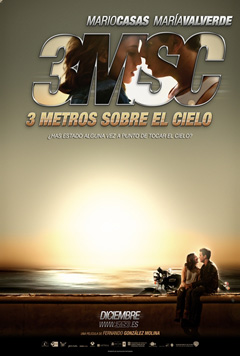 Nominated for Best Adapted Screenplay at the 2011 Goya Awards, I really couldn’t have figured that a movie nominated to the prestigious award could suck so bad. But I was stuck on a bus for more than four hours, and I had no other remedy than to sit and watch.

Once I realized that Tres Metros Sobre el Cielo was an adaptation of a popular Italian two-parter young adult novel released in the 90s, followed up by Tengo Ganas de Ti, everything that I felt was wrong with the story made sense- Teenagers over 13 years old aren’t (and shouldn’t) be the target audience for this. I wasn’t the intended audience, and I cringed at the thought of it EVER finding an audience. Yes, just like Twilight had become a pop culture staple for all the wrong reasons, Tres Metros Sobre el Cielo became a box office success getting nearly 10M Euro back on its day, securing the production of the second movie that was released not long ago, and topping it all with this mind-boggling Goya nomination. What are you doing, Spain? WHAT ARE YOU DOING? You could have maybe honored the movie visually, but of all the aspects you could have highlighted, you guys decide to give it a nod for Screenplay?

Tres Metros Sobre el Cielo follows a Marty Stu [1] simply known as H. (Casas), a hot-tempered, moody bad boy with a really hot body. Cocky to no end, he definitely smells like trouble from the first close-up in contrast to the uptight Babi (Valverde), whom we meet in a gracious sequence of her getting her school uniform on (because the Spanish can do it). Their first casual encounter is rough as Babi is being drove to school and H. is riding his bike, when he calls out to her “Ugly!” (The English subtitles called her a “Duckface” instead), and romance blooms as the script requires Babi to encountered H. a few times over so that we can see how this “bad boy” just needs a little bit of fixing.

Of course, the first few minutes shows us a Babi that at least tries to show some dignity, unlike her bimbo of a sister (Nerea Camacho) and more annoying best friend forever, Katina (Salas). However, it’s inevitable. We know from the get-go it’s over for Babi and that she’s going to fall for H’s attributes. We were just hoping for H to have some redeeming qualities. Sadly, by the end of the near 2hr. movie, there’s no contrition, little consequences to H’s behavior other than that half-ass death by the end of the film, that I guess helps Babi get away from the hot mess that would have been their relationship. The emotional connection is never there, because you are so annoyed by H’s brooding aggressive attitude that you keep exclaiming “Oh, my god” each time a character is destroyed to move his character forward. The biggest one is the tearing down of the school teacher who is bullied into preferential treatment of Babi by H’s kidnapping of her dog, Pepito. If she had remained the hard-ass that she was at the beginning of the story, she would’ve called the cops on H and his good for nothing pal, Pollo (Cervantes).

Besides being a horrible example for both girls (who are pushed to fall in love with broody problematic young men) and boys (who are pushed to become broody problematic young men because it’s cool), I felt Tres Metros Sobre el Cielo was filled with other terrible characters, from the cliche overbearing manipulative mother (Cristina Plazas) who seems to be the source of all of Babi’s issues, H’s cheating “whore” of a mother — on the women’s side — as well as easily taken advantage Alex (Diego Martin), H’s brother, and the authority lacking father of Babi (Jordi Bosch) on the men’s side.

For all its story and character lacking, Tres Metros Sobre el Cielo is glossy. It’s got a schmaltzy soundtrack of mixed Spanish and English music that is over-bearing, but this is as Hollywood as Spain has ever done- co-production notwithstanding. The acting is passable, with some highlights from Valverde, who does her best with the material she’s been given. Then again, the biggest problem on 3MSC isn’t its production, it’s the source material.