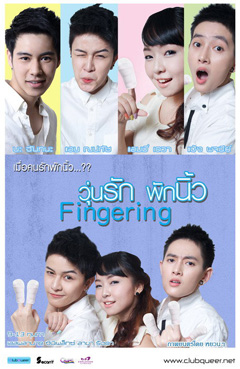 The acting is a little bit weak — wooden dialog and exaggerated reactions, though those could be a result of cultural difference and lack of familiarity with Thai as a language. However, the production quality is quite low. It’s independent and it’s all shot as if you had gotten together with friends to work on a student film, which is a fine quality if you’re used to it. It’s far from an indie Hollywood flick, but it’s got its charm.

The film runs that fuzzy line between film and short film, as it never hits the hour mark, so it’s short enough to watch it without much guilt. You can easily find it with a quick search (avoiding X-rated sites) and enjoy it despite the lack of proper subtitles in English (Engrish seems in order), especially recommended for people that aren’t much into the “coming out” of characters on film- it’s a non-issue here. They all know who they are, they just aren’t quite ready for committed relationships. It’s somewhat refreshing for fluff, and it’s got a very nice scene by the end with Tang, who really is the perfect girlfriend. She doesn’t get much of a build up, because she sort of gets relegated in between all the other characters and that somewhat fuzzy relationship between Mean and her male friend (whose name escapes me). At a point in the film, I was maybe hoping for Chaeng and her to get together because they seemed to be on the same level, but alas- bad characters do grow up.