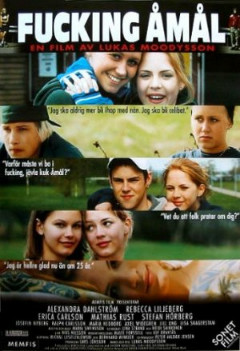 You know how annoying one can be when we’re teens? We think we know everything, and treat others as if we were morally better than the rest, thinking we know better than others.

You know how in Hollywood films teens are cool, and they do know better than others and are so very aware of themselves and their own surroundings? Fucking Amal is exactly the opposite — the teenagers in the film are very real, they’re clueless about life, but because of this the audience is taken back to their high school years.

Fucking Amal — or the less punchy American title Show Me Love — is the story of two apparently different girls, Elin (Dahlstrom) and Agnes (Liljeberg). Agnes is the slightly “dark” and independent girl in high school, who walks her own way without caring (much) about what others think of her — she is also in love with Elin, who in turn is a very popular girl because she follows the latest trends and works hard to be liked by everyone. Elin’s deluded dream is to become a model — to which her sister tells her she’s too short — and get out of “fucking Amal“.

On the day of Agnes’ birthday, she invites people to her dinner party, which Elin and her sister attend in search of free booze and to escape the regular lives of Amal residents. When Elin is trying to avoid Agnes, she finds a poem and discovers how she feels about her, she mockingly kisses Agnes and leaves. Agnes is hurt, but without a clue how different Elin feels now.

There’s an amazing feature about teen films, in that you either begin thinking how you could have liked that, as you begin feeling shame for ever proclaiming ever liking that film. The other one is when after repeated watches, you start liking the film more and more. That’s the case with Fucking Amal, it’s a really fluffy film but because the characters are real teens, you are allowed to think how silly they are.

Elin struggles between what’s in or out in Amal, whether her attraction to Agnes will be accept or not, or if she can be anything than just a mere beautician that stays in her hometown, married and her 2.5 kids. Elin also needs to fight her slightly older sister, who is possibly just as immature (if not more) than Elin.