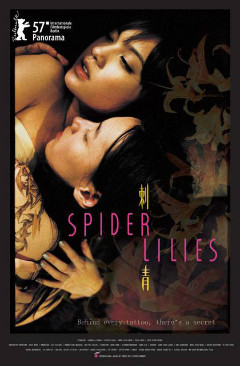 The character development problem in Chou’s Splendid Float gets fixed in Spider Lilies. In here, we follow two women, Jade (Yang) a young woman who spends her nights on sexy live webcams for some money, and Takeko (Leong) a quiet tattoo artist.

After Jade teases her web clients with the story of a sexy tattoo in a private part of her body, she sets out to get one, when she meets Takeko, the owner of a tattoo parlor. To Jade’s surprise, there’s a detailed spider lilies artwork showcased on the walls, which remind her of her first love when she was 9 years old.

Jade tells us how her first love had that same tattoo of the spider lilies, and it turns out to be Takeko. It is then that Spider Lilies continues to tease with bits and pieces of both characters backstories, infusing more depth into something that might have just been a love story.

On one side we’ve got — pop singer — Rainie Yang playing Jade as quite the bubbly webcam girl, but she is living in a bubble for a reason. The abandonment from the people she loves, makes Jade create this illusion in which they didn’t really leave her — her relationship with her grandmother is quite moving. Jade is still hoping that, one day, her first love comes back to her.

On the other side, we’ve got Isabella Leong as Takeko as a kind of shy, but at the same time kind of cool character. Her issues, however, are even more messed up than Jade’s — especially if you want to consider LGBT representation. Takeko is not “wild,” is not as if she’s going to party after party picking up women. Jade falls for her as a kid because of Takeko’s cool persona, but it is in Takeko’s first relationship where everything goes wrong. It’s as if the only time she put herself before her family, she gets punished. One wouldn’t blame her if she never wanted to sleep with a woman again, because her experience is quite traumatic, and to make matters worse — tragedy happens again.

Jade’s phone ultimatum is quite heartbreaking — Is Takeko willing to remember everything or will she choose to forget? The couple may not have as many scenes together, but all their characters stories create a sense of familiarity with them that we want them to work it out.

I also want Isabella Leong back on screen, and not in something crappy like The Mummy 3.