Were the World Mine 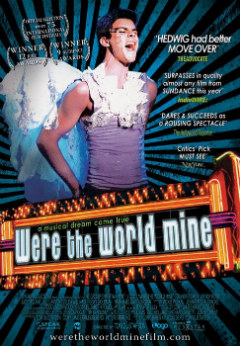 Let this be a warning: if you hate Shakespeare, musicals, or whimsy fantasy — you’d better stay clear from this one.

Were the World Mine is the story of Timothy (Cohen), and out-gay young man who’s had trouble being accepted by his father, ending up living in a broken home with a mother (McLane), who does her best to take care of him, but sometimes isn’t there.

Timothy’s mom is struggling to pay for his education at an all-boys private school — where he’s being picked on by most his classmates, but also where he meets Jonathon (Becker), a fairly amicable jock whom he will start having feelings for. It is then that the senior class meets their art teacher, Ms. Tebbit (Robie) who is set out to put on stage Shakespeare’s A Midsummer’s Night Dream, casting Timothy as the mischievous Puck. During his line rehearsals, he discovers a magical potion that can make anyone fall in love with the first person their eyes meet, setting out to enchant Timothy, and turning everyone in town gay.

Let me tell you the truth, when I “read” Shakespeare, I do not understand half of what he’s saying to me, but that’s besides the point, since Were the World Mine is only inspired by it. The film has a certain feeling that doesn’t make it seem like it’s an American film, but a UK one — maybe it’s the all-boy private school setting.

There’s a lot of tension arising from the fact that Timothy is gay, and that Ms. Tebbit wants to setup an “everyone is in love with the wrong person” play with an all-male cast. The rugby teacher is against it, and the headmaster is backing him up, so she does her real “magic” and points Timothy towards the potion that will create all chaos, which creates most of the comedy in the film — the rugby teacher (Christian Stolte) is especially funny.

An issue that might bother people is that when everyone turns gay, all of a sudden they’re all effeminate, as if it meant the same thing. However, if you really think about it, it’s only the heterosexual characters that turn effeminate, but that when Jonathon turns “gay” he is pretty much the same — except he speaks in fancy talk, but everyone does so…

The movie doesn’t make much sense if you think too much about it, but it is a fantasy (and a musical) film so the audience is required  a certain degree of suspense of disbelief. Let it be known that I did warn you~