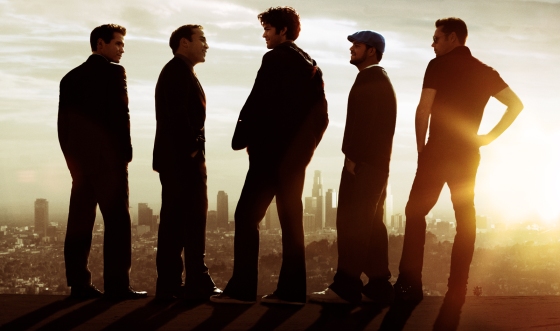 Entourage ended its run back in September. The eighth and final season — which lasts only 8 episodes, just like the first season did — takes place three months after the events of Season 7 in which Vince completed his three month rehab stint and found himself sober and ready to get his acting career back on track — by creating a film starring himself.

Meanwhile, E and Scott Lavin (Scott Caan) are managing Johnny Galecki while Ari is trying to salvage his marriage before it ends in a nasty divorce. Also, storylines that started during last season continue to develop — Turtle continues his quest to become a millionaire on his own accord and Drama keeps working on his animated television series alongside Andrew Dice Clay, whose ego might become an obstacle for Drama.

And once again, the E and Sloan (Emmanuelle Chriqui) love saga continues. But after years of seeing them go on again and off again, who fucking cares? At any rate, their discussions were roughly on par with Ronnie and Sammie from Jersey Shore. Kevin Connolly’s character is almost screwed up beyond repair in a messy storyline that also involved Johnny Galecki, Melinda Clarke as Sloan’s stepmother and Malcolm McDowell as Sloan’s father, Terrence McQuewick.

Unlike past seasons, Season 8 is the first with hardly any nudity. It might be unsettling for the show’s fans to watch a boobless season, but it makes sense to go in that direction because of Vince’s recovery angle and watching him grow up.

To my surprise, the first half of Season 8 turned out good despite Vince’s rehab stint being shrugged off in the blink of an eye. The pacing was fine and the writing for the first half seemed better compared to last season’s. The friendship factor still works despite the characters being apart more than often than not, and Jeremy Piven, Kevin Dillon and Rex Lee — who plays as Ari’s gay agent, Lloyd – were fun to watch.

However, the second half wasn’t good at all. While the first half of Season 8 looked like producers were pulling out all the stops to end the show properly, the writing for the rest of the episodes came across as lazy and made the series finale look pretty flat. Nearly everyone was coasting around and most of the storylines were resolved in typical Entourage fashion [see: it’ll be alright in the end, sheer luck]. And with the exception of Drama’s storyline, the rest were finished in ways that were either cheesy or illogical.

In the end, Entourage doesn’t go out with a bang in its final season. The final episode serves as a setup for the eventual movie despite wrapping up almost all the storylines and leaving one character’s goal randomly forgotten. Unless a drastic improvement happens, the upcoming Entourage film has a very high chance of being on par with the Sex and the City films. Both HBO shows shared similarities in structure, storytelling, entertaining moments and characters. Unfortunately, Entourage declined in entertainment value over the years a bit faster than Sex and the City did.