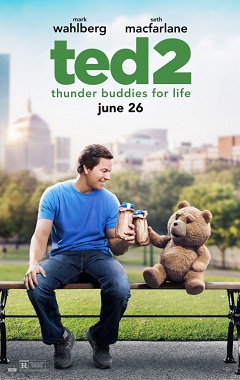 “Happily Ever After only exist in fairy tales, yet a talking teddy bear is about to marry his girlfriend… proving that Americans don’t give a crap about anything.”

Things start really great for Ted (voiced by MacFarlane), as the living teddy bear marries his girlfriend Tami-Lynn (Barth) in a fancy wedding — drinks, party and musical segment included. One year later, Ted and Tami-Lynn’s marriage is starting to break down. Unlike his best friend John (Wahlberg), who has been divorced for 6 months and currently doesn’t want to fall in love again, Ted tries everything he can to salvage his marriage. However, Ted’s quest also brings in some legal issues which might ruin his life, and the only person that can save Ted and prove that’s a person in a court of law is novice lawyer pro-bono Samantha Leslie Jackson (Seyfried).

Unlike Ted, which fully embraced the concepts of friendship and growing up as a person, Ted 2 tackles the concepts of civil rights through the teddy bear of all people/things. It’s an interesting concept to showcase in the sequel for Ted, which was mostly a comedy film with dirty jokes that were hit-or-miss, yet it was kinda fun to watch because watching a filthy-mouthed, cutesy-looking teddy bear looked like a novelty (sort of). I must admit it was feasible to pull off the civil rights concept (and Ted’s status) considering that wasn’t addressed completely in the previous film because Wahlberg’s character was more of a lead character than Ted himself. Ted 2 keeps intact the endorsement of drugs, friendship (in a bro-ish way) and MacFarlane’s brand of humor as seen in the first film, which may work or not for some people, but it is also packed with a bunch of things. Civil rights movement aside, Ted 2 also includes jokes of all variety, which includes topics such as sex, improv comedy, sperm, dicks, pornography — the last three almost go hand-in-hand  — romance, marriage and most notably, the black race, which is omnipresent during a pretty good chunk of the film and clashes unevenly against Ted’s quest to prove his status as a person despite being a talking teddy bear mysteriously brought to life.

Although Ted 2 seems to be heavy on the topic of racism through its jokes, which are hit-and-miss, it still manages to put out legitimate funny moments here and then. Notable highlights includes the improv comedy scene, Liam Neeson’s cameo, a visual Paddington reference through Ted, John Slattery’s appearance in the court scene, a strong payoff to a joke involving Samantha’s eyes, and the massive Comic-Con brawl near the end of the film. Still, Ted 2 drags at times through Ted’s quest, most of the racist jokes in the film walk a very thin line between funny and unfunny (which is worse than being offensive), and the chemistry between Wahlberg and Seyfried wasn’t good at all, most notably when they were developing the rom-com angle between both.

Despite Ted 2 pulling off some funny moments and pushing for the civil rights movements (albeit in a spotty way), I’d still put the first film ahead of this one. Granted that this is a product from Seth MacFarlane and he’s well known for pissing people off, but Ted 2 could have worked better with a proper balance of his particular brand of humor and the angle of its main story, which could be a major turnoff for minorities.