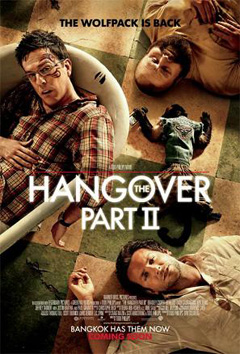 A couple of years ago, The Hangover became a critical and commercial success, which not only made Bradley Cooper, Ed Helms and Zach Galifianakis into big stars, but it also led to an inevitable sequel which was very hard to top.

The Hangover Part II follows the Wolfpack in Thailand as Stu (Helms) is about to marry his fiancée Lauren (Chung), despite disapproval from her father (Sirijanya). After a near-disastrous toast by Alan (Galifianakis), Stu is joined by his best friends and Lauren’s brother Teddy (Mason Lee, son of director Ang Lee), whom is severely disliked by Alan, at a bonfire near the beach along with only a six-pack of beer and two bags of marshmellows. As expected, things didn’t went as Stu would have liked. I mean, all he wanted was to have a bachelor brunch.

The next day, Phil (Cooper), Stu and Alan wake up in a dirty hotel room in Bangkok with no memory of what happened last night. Stu has a Mike Tyson-like tattoo on his face, Alan’s hair is shaven, a chain-smoking monkey is found and they realize that Teddy and Doug (Bartha) are missing. But Doug quickly called them and he is actually safe at the hotel room in Thailand. The worst part of this is that all but Teddy’s finger is missing.

“We had a sick night, bitches!”

And of all people, gangster Leslie Chow (Jeong) partied with them too and appears to have valueable information regarding last night’s events. But before he can prove himself useful, his heart stops after snorting a line of cocaine. So once again, Alan, Stu and Phil have to play the detective role, retrace their steps and find Teddy just in time before Stu’s wedding takes place.

“No, this time we really fucked up.”

Yeah, you sure did, guys.

Todd Phillips and the screenwriters changed some of the stuff in The Hangover Part II to try and make it feel different than The Hangover such as increasing the violence, shock value and raunchiness – and it even features an LGBT moment, but not exactly in the same way YAM Magazine talked about LGBT-related things during the recent LGBT Blogathon. But the sequel still shares the same vertebral column as the previous film did, and the way the film is presented as a whole, you might as well think that it’s a remake from The Hangover. Some of the changes and jokes inserted in the film were clever and funny to watch, but some of them were not. It is predictable to watch, but it is also a darker and outrageous  film thanks to the shooting location at Thailand, which looks volatile and dangerous. Given the situations they’re placed in, you might even feel a bit worried for the characters if you liked them. Ken Jeong’s role here is a bit larger, which may annoy those who didn’t like him in The Hangover and tv show Community. And once again, Doug doesn’t appear for much of the film despite not being the victim in peril this time, but he had a key role in getting Alan invited to the wedding, despite Stu not wanting Alan to be there in the first place.

And despite most of the laughs coming though Jeong and Galifianakis – whose man-child character is very mean this time, Ed Helms actually stands out as the best actor from the film. Helms makes Stu look believable in the way he reacts to all the scenarios that take place during the film as well as his concerns for his wedding, he also made me laugh with his Allentown song he performed (a variation of Billy Joel’s song), and by the end of the film, he gives a pretty good speech.

Other things worth of praise includes using the Black Hell song from Danzig as an awesome way to kick off the film, the chemistry between Cooper, Helms and Galifianakis is still intact, it’s visually good-looking thanks to its bigger budget, the references to the past film and the pictures shown at the end of the film are fun to watch.