Eric Enno Tamm – The Horse that Leaps Through Clouds 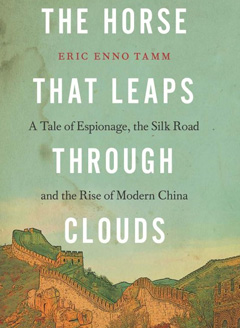 Title: The Horse that Leaps Through Clouds: A Tale of Espionage, the Silk Road, and the Rise of Modern China
Author: Eric Enno Tamm
Genre: history, journalism, travel

1906 — Baron Gustaf Mannerheim is charged with a dangerous intelligence mission from Tsar Nicholas II: gather information on the peoples and tensions from St. Petersburg to Beijing, with special focus on what may weaken the reawakened power of China.

2006 — Following Mannerheim’s journals and other writings, Canadian journalist Eric Enno Tamm begins to retrace the path Mannerheim traveled. Dictatorships, deserts, and even the Chinese government’s ban on his entry will not deter the author. Tamm discovers what has remained, changed, or simply taken a new guise after a century of socio-political upheaval.

All aspects of the journey in The Horse that Leaps Through Clouds are shared with the reader: sights gorgeous or disheartening, sounds startling or pleasant, tastes delectable or vomit-inducing. Yet the multitude of sensations do not overstuff the prose. From sharp observations of facial features to telling details of place and personality, the book is an excellent guide through encounters with many cultures and countries. Tamm has expert, if not perfect, judgment on how to intertwine historical academic writing with thorough present-day journalism.

What occurs in the book is so extraordinary that I first doubted it was pure non-fiction. However, many particulars concurred with other material on Russia, Central Asia, and China that I’ve read in the past year. Several times, Tamm’s breezy flow assumes reader knowledge of names and terms (such as hukou residency permits) and doesn’t take a phrase to explain them, at least outside the copious footnotes collected at book’s end. This is a minor annoyance, for the pace and clarity of the work are otherwise considerate of the casual reader.

There are economical but honest mentions of Tamm’s opinions, preferences and limitations. He knows when to pull back his presence and let a variety of perspectives speak. A few word choices, though, did give the impression of unconscious Western-centric judgment. I was also surprised that the contemporary construction of the Three Gorges Dam, which flooded ancient cities and displaced thousands, did not make a brief appearance in discussions of “The New China.” It may have been too distracting a controversy to include, especially since the region is far from Mannerheim’s trail.

Mannerheim’s mission becomes the base for delving into numerous issues: war, colonialism, industrialization, the effects of Communism in the region, societal changes, pollution, preservation, religious conflict, linguistics, entertainment, gastronomy, education, control of history, and much more. This topical breadth never intimidates, for a feeling of adventure anchors reader appeal. Thoughtful and exciting, The Horse that Leaps Through Clouds is an astounding feat of exploration and writing.

It might be the best 2011 release I read this year.