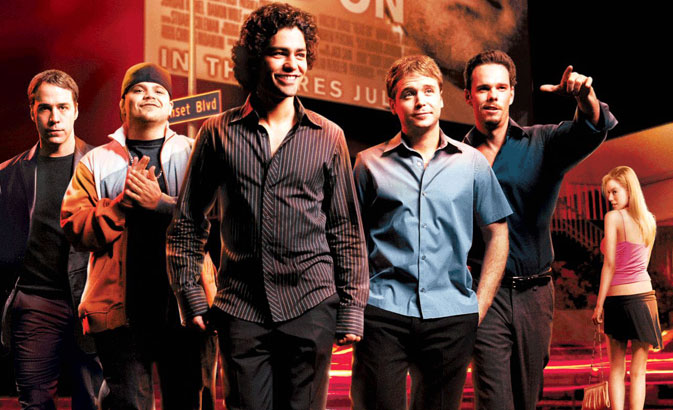 For the last 6-7 years, it’s been the normal/cool thing to hate on Entourage, which is getting a film that will premiere in the USA in a couple of weeks and anyone knew it was going to happen at some point because of the post-credits scene from the lackluster Season 8 finale. Many in the States are mixed at it happening, but my biggest question as to why it is made has to do with me thinking that Entourage isn’t as popular as Sex and the City was worldwide during its original airing.

On the last few years, bro-ish films and/or tv series tend to get raged on by both men and women. I can agree with some of the criticism on some of the films geared strictly towards men since women do not have it fair in the film industry, but I care more about overall film/tv quality as a whole regardless of the topic displayed rather than favoring any sex genre or race (but I do agree that everyone deserve equal rights on everything, except for certain strict things or confidential stuff) in entertainment media. Me favoring certain things depends on how I feel at the moment, just in case you need to know that.

Entourage is indeed very bro-ish and it’s been honest about that from the start, regardless of every season’s respective quality. At the time of its release — funny enough, it premiered during my birthday in 2004 — it was also HBO’s replacement for SATC, which got two post-TV feature films and the second film is one of the worst of this decade in my opinion. Currently, Girls is the closest thing to a replacement for both Entourage and SATC since How To Make It In America [S1, S2] got axed by HBO after two seasons due to poor ratings. I’ll say that Entourage is the male alternative to the former HBO female series and more, but I’ll tackle what Season 1 (the shortest of the series with only 8 episodes along with the final season) deals with first.

What would you do if your best friend was a Hollywood movie star?

That’s the premise of Entourage — based on the real life of Mark Wahlberg, who is one of the series’ executive producers — when rising star/actor Vincent Chase (Adrian Grenier) gets his first real taste of fame and fortune following the success of his first major film Head On. Vince isn’t alone on his acting journey, as he’s always surrounded by his brother Johnny “Drama” Chase (Kevin Dillon), a struggling tv actor who wants to make it big just like Vince, and his two childhood friends: the freeloading and marijuana-smoking Salvatore “Turtle” Assante (Jerry Ferrara), who is Vince’s driver for the most part, and Eric “E” Murphy (Connolly), the latter being Vince’s best friend and his manager too.

Just like every actor has their agent, Vince has one in the form of Ari Gold (Piven), who is short-tempered and often clashes with E in regards of Vince’s career path. As everyone wants to continue living on the luxurious lifestyle [see: money, cars, girls, parties, etc.] through Vince’s career, he has to pick a next project: either the big-budget action film Matterhorn or the indie film Queen’s Boulevard.

I believe most people know by now what happened with Vince, as long as you have watched the pilot episode. But for those who don’t, I won’t reveal any more regarding that particular thing.

Like I said before, Entourage is the male alternative to Sex and the City and they’re almost equal. People living the upper-class lifestyle in a expensive USA state. A not-so-interesting lead character surrounded by supporting characters who are way more interesting to watch. And they’re genre-driven in minds. Some notable differences between both series (general settings aside) is that Entourage edges out SATC in race representation despite both series being almost white-ish for the most part and the naivety factor of discovering luxury material at the start is well executed here. However, you don’t get to see the supporting actress in SATC always carrying Sarah Jessica Parker’s ass (she can handle herself despite Carrie being not so good to watch at times) unlike the supporting cast of Entourage does with Grenier, whose character in Season 1 is pretty much a money-plot device (and sex-device too) and gets easily influenced by many people, but at times he’s watchable when he remembers his humble origins. By the way, Connolly is a co-lead because E has many scenes not only with Ari and Vince, but he also dates Ari’s assistant Emily (Samaire Armstrong) and later on clashes with director Billy Walsh (Rhys Corio), who becomes an important character later on in the series.

The question regarding why I enjoyed Season 1 is getting to see what life for a Hollywood star might be in vivid detail not only by showing Vince’s lifestyle and work stuff, but also showcasing real locations and a lot of celebrities popping up from the entertainment, modeling, sports and even the pornography scene. That alone is why I cannot rank Showtime & BBC’s Episodes [S1, S2, S3, S4] above Entourage‘s second season, which is the best of the entire series, despite the main trio of Episodes being way more talented than the main casts from Entourage and SATC. But then again, HBO has a lot of money. Therefore, Entourage looks the way it is.

By the way, the series uses music greatly, or at least chooses to use cool songs. The way Jay-Z’s Lucifer [Xiami] is used as  the pilot goes into credits works like a nice “boom” effect, just to cite one example.

Anyways, the real standout of Season 1 is Piven’s Ari, who is aggresively hilarious and sexist too, but he’s a perfect fantasy character that you would love to be when you feel enraged about anything and Piven shines like gold (no pun intended) on Season 1 in that regard. A close second who be Connolly’s E, who tries his best to ground down Vince and his friends and trying not to kill Ari when they interact at any time. Connolly’s acting is decent-to-good, but his pairing with Armstrong’s Emily makes him more watchable. On the other hand, Ferrara and Dillon operate as comic relief, yet both are more interesting to watch than Vince despite Turtle being a lazy dude for the most part and Drama’s struggles and antics are funny to watch. Actually, Entourage should have made Kevin Dillon the lead instead of Adrian Grenier back then since he’s more talented, but what’s done is done.

At any rate, Season 1 is watchable for me. As far as the 2015 film is concerned, , I expect it to get trashed on harshly, but I hope it gives Entourage real closure regardless of its quality. One film should be enough and I hope HBO has learned from its mistakes by now. [1] Personally, I don’t think it should be that tough to surpass at least Season 7 & 8 as well as both SATC films. The trailers hint to show the best and worst elements of the series and the premise seems to be sort of Ari-centric with also Vince being a lead character.

The real question regarding the 2015 film is: are you ready for one more ride?