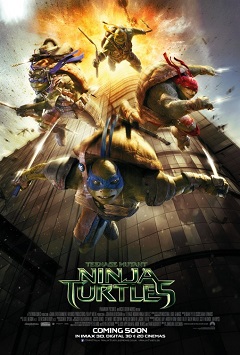 I could have done a very brief review of the latest Teenage Mutant Ninja Turtles film adaptation by simply singing “No Ninja, No Ninja, No!” a la Vanilla Ice’s Ninja Rap, but I’m not allowed to write incredibly short reviews.

Anyways, this film should have been retitled as “April O’Neil” because she’s the one that gets the most amount of screentime and focus as well as being highly important to the Turtles’ origins.

The set-up of the 2014 TMNT film is slightly similar to the 1990 film, with Shredder’s (Masamune) Foot Clan attacking New York City and news reporter April O’Neil (Fox) is investigating the attacks. As she gets deeper into her research, this eventually leads her to the film’s main attraction — the Ninja Turtles and their rodent master Splinter (played on-screen by Woodburn, voiced by Shalhoub) — as well as clashing against Foot Clan’s plans, which includes spreading a deadly virus across NYC.

Like I said, April O’Neil is the main attraction and that’s because Megan Fox is playing her (she was okay at best). Sure, we get to see the Turtles in action and having clashing personalities and those remained intact compared to past TMNT films. However, they play second fiddle to April since she’s the most developed character (Splinter, Eric Sacks (Fichtner) and April’s cameraman Vern Fenwick (Arnett) come close to a lesser extent) — we get to see how she’s struggling with her career as well as seeing Vern putting up with her stuff because he has feelings for her — and she’s connected to the Turtles and Splinter’s origins (names included) through a past project back in 1999 involving her deceased father (Fitzgerald) and Sacks. In present day, April meets Sacks after many years and asks about the past project, which ends up revealing some truths about that project and triggering the battle between the Turtles and Foot Clan.

While the above sounds interesting in paper, the execution of it sadly resulted into a boring and unfunny film for the most part despite its action scenes. We already knew that the new Turtles and Shredder looked odd — Shredder’s suit resembled a mash-up of Swiss knives and the Dark Vader suit — and the film hinted at Fox’s April getting the spotlight since she’s the bigger star. This TMNT film includes Michael Bay as a producer and there’s several trademark stuff from him present in the film. Surprisingly, Fox’s April doesn’t get sexualized wardrobe-wise, but that didn’t stop Michelangelo (Fisher), who pretty much creeped on her except when danger happens.

In terms of the action scenes and the main attractions, the highlight for me was seeing Shredder versus Splinter and I’m saying this because my interest in the Turtles varied severely according to character. Raphael (Ritchson) was actually interesting to watch thanks to his lone wolf tendencies, but the other three not so much, especially Michellangelo who was very annoying to watch despite his well-known status in the franchise as a comic relief character — two of his highlights that actually made me laugh involves two songs: one of them is from Gwen Stefani and the other one can be heard in the final scene — which clashed pretty badly with his creeping towards April. At least, Arnett’s Vern falling for April looks believable and relatable in spite of its juvenile content in contrast to Mikey. Even if he lacked in human contact because the Turtles had their rules of not being spotted by humans at any cost, Mikey still came across as a creepy perv.

What a shame it is to see TMNT played out like this, because even the 2007 film was more watchable than this. A few tweaks on the script and amping up the violence would have yielded an interesting blockbuster film with a quite strong female character.