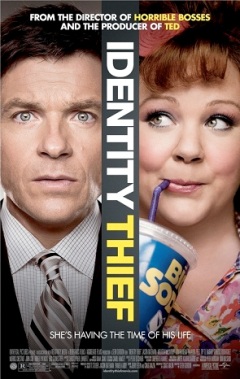 Following Horrible Bosses, Jason Bateman teams up with director Seth Gordon once again in Identity Thief, which also stars Melissa McCarthy. Much like Gordon’s previous film, Identity Thief also explores a fantasy that would be hard to pull off in real life (not to mention illegal), which is easily described in its title.

Identity Thief begins as we see Diana (McCarthy) having the time of her life, partying around and buying drinks for everyone at the club… at the expense of someone else’s credit card. Despite some troubles, she continues with her lifestyle through other people’s identities (as well as their credit cards). Things start to worsen for Diana when Sandy Bigelow Patterson (Bateman), a working man in the corporate world who struggles with his responsabilities at work and his family’s demands, notices something unusual with his credit card’s transactions, leading him to stumble upon Diana.

Shortly after meeting, however, Sandy and Diana are forced to be on the road together thanks to Diana’s past actions attracting other criminals going after her.

Despite Identity Thief inserting the “buddy road trip” card quickly after Sandy and Diana meet, I would say that the film is more of a Melissa McCarthy vehicle rather than a joint effort between her and Jason Bateman, who plays the normal nice guy turned detective/hero after something goes wrong with his finances, but doesn’t get to shine as much as McCarthy did in the film. Diana is pretty despicable because of her identity stealing gig as well as her arrogance, but McCarthy makes her feel sympathetic when we see that Diana tries to cope with her loneliness thanks to not being able of making friends with anyone despite buying drinks for everyone at the clubs as well as her road to redemption as a person later on when she meets Sandy.

Melissa McCarthy is easily the best part of Identity Thief, but the screenplay from Craig Mazin works heavily against the film being worth watching. The film’s shift in tone is executed in such an uneven fashion that it makes the plot and narrative work tedious to watch. Even the road trip and action/crime scenes felt boring along with the comedy antics, which were more miss than hit and had a lazy feel to them. Then again, that shouldn’t be surprising, considering most of Craig Mazin’s resume as a screenwriter. While Bateman and McCarthy were able to rise above the screenplay’s flaws for the most part, almost all the supporting cast members were underutilized and wasted, except for Eric Stonestreet’s Big Chuck, a guy who ends up having a one-night stand with Diana, who was actually amusing to watch in his few minutes of screen time.

What’s even worse than the screenplay is that the film had potential to be good and interesting through the identity theft concept, which wasn’t well explored except for a few minutes through the lead characters and tossed aside in favor of jokes that didn’t work out that well. If you’re thinking about seeing this on the big screen, wait for a DVD/Blu-Ray rental or cable instead.