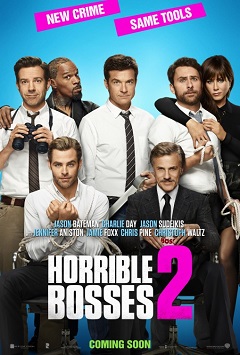 I liked 2011’s Horrible Bosses despite not being dark enough for its premise, but its cast and laughs made it up for that aspect. Producers aside, who in their right mind thought it would be worthy of a sequel? Even if the cast ended being funny to watch, it’s not like Horrible Bosses hinted at anything for a sequel since it lacked any loose ends to its story.

How can you justify a sequel? Horrible Bosses 2 tries to justify its existence by following up the main trio 3 years — I guess 3 years at least since Dale (Day) is now a married man with 3 kids and he’s the only one that has notably changed, life-wise, unlike his friends — after the events from the first film. Free from having bosses to work for, they’re struggling to find financial investors for their Shower Buddy invention, which is pretty much a car-wash-inspired shower. A tv spot showcasing their invention leads them to meet Burt Hanson (Waltz), who offers to bankroll their 100,000 units for US $3 millon, which the trio happily accepts and goes into production. However, things take a turn for the worst when Burt royally screws them over by backing out of his deal, leaving the guys with a US$500,000 debt and finding a way to pay it off before it’s too late.

After figuring out that they can’t legally defend themselves against Burt, they come up with several ideas to pay off the debt. Kurt (Sudeikis) brings up the idea to kidnapping — or kidnaping, as he spells it — Burt’s son Rex (Pine). Much like their previous murdering plans, things don’t always go according to plan.

Horrible Bosses 2 continues the trend of going against corporations that the previous film displayed and the trio keeps intact their same characteristics: Nick (Bateman) is the voice of reason, Kurt thinks about sex often and Dale is a living chipmunk, but they’re still idiots. While there’s hardly any “evil boss” cahracter in this sequel despite Waltz’s presence, Chris Pine’s character functions as one when Rex turns the tables on the guys and makes himself the center of attention in terms of the plot as well as the entire film. Pine’s performance is the film’s biggest highlight and he’s really great to watch as he steals the show thanks to his energy, comic delivery (both verbal and physical) and counts with a backstory that justifies his actions. If anyone deserves recognition for Horrible Bosses 2, it’s him since no one else comes close to his performance.

The biggest problems with this film not only has to deal with justifying the need for a sequel, but the screenplay for Horrible Bosses 2 provides lots of hit-and-miss jokes that aren’t always amusing to watch. But what even’s worse is seeing Kurt and Dale being dumbed down beyond belief. Granted that those two characters were already shown as idiots before, but this film goes overboard with the idiotic aspects and makes you wish for a better ending. On the other hand, some changes were seen with Dean “Motherfucker” Jones (Foxx) getting expanded screentime as well as seeing Bateman interacting with Aniston.

While I didn’t hate the film, and I actually laughed with some of the scenes, Horrible Bosses 2 could have been executed better if it used its cast better (they fared alright, but Waltz was wasted here), refine and/or amp up the humor and fully embrace the parodying of a sequel like 22 Jump Street did rather than doing it partially.