April and the Twisted World 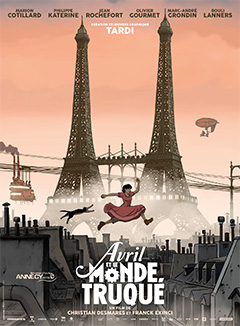 Turns out 2015 was an amazing year for animation– great titles that were released in the US that got us to tip our hats when Oscar nominations came [The Boy and the World, Shaun The Sheep Movie, and When Marnie Was Here], and just stunning quality work released throughout [Inside Out, The Little Prince, The Boy and the Beast, Monkey King: Hero Is Back]. Alongside them there was April and the Twisted World, which premiered at last year’s Annecy Film Festival, earning Best Feature.

The film takes Jacques Tardi’s visuals as inspiration [illustrations] (known for the series of The Extraordinary Adventures of Adèle Blanc-Sec), setting up the alternate universe where France is being ruled by Napoleon V (!!!), after an onslaught of failed scientific experiments in search for a serum of immortality and the mysterious disappearance of world history famous scientists, which stops the development of modern technology. Trapped in a steampunk world where we still haven’t discovered electricity, we follow young April (voiced by Cotillard in her more adult form) who had lost her scientist parents (Gourmet + Grenon) in a freak lightning flash incident, after they were being chased down by policemen trying to recruit them for the Empire.

Only accompanied by her talking cat, Darwin (Katerine), April sets out to work on that immortality serum, when she meets a street-smart young man named Julius (Grondin) and she’s pushed to discover what’s happening with all the scientists.

Desmares and Ekinci’s April and the Twisted World brings back the recognizable adventurous style of Tintin, only with less globe-trotting and more geeky stuff for the light history buffs. The pace of the story is quite dynamic, and dialog is agile. It comes alive when Cotillard has juvenile arguments with Grondin, taking me back to the days of Jeux d’Enfants and La Môme; which was the period when I was her biggest fan. Tardi’s design is much more elaborate than Marjane Satrapi’s Persepolis (which is referenced in some texts, though they have little in common), though it doesn’t deal with the complexities of that source material. April’s universe is a much more straightforward family film, but no less a fun visual marvel.

What’s even better is that it’s a story following a young woman who likes science. And, of course, she has a cat who is as much (more) a connoisseur as his owner.