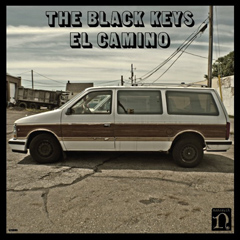 My interest (and liking) for The Black Keys only started during 2010. While I was aware that they played I’ll Be Your Man, the intro song for HBO’s Hung, it was thanks to playing Fifa ’11 that I stumbled upon Tighten Up and finally began listening to them. Now they bring us El Camino, their seventh studio album, all of tracks produced by Danger Mouse.

On El Camino, the band doesn’t entirely retain its soulful garage-rock sound that made it famous in 2010’s with thier breakthrough album, Brothers. Nowadays, they feel more aggressive, riff-driven, upbeat and loose through dance-worthy, catchy and energy-pumping tracks such as Lonely Boy, Gold on the Ceiling and Money Maker. However, they don’t sacrifice their sound in its entirety, which means The Black Keys are aging well after being active for 10 years.

El Camino is consistent in sound quality and upbeat tracks designed to help The Black Keys move into the mainstream spotlight smoothly. Thanks to Danger Mouse’s involvement in the production of the album, the band has a laidback 70s rock feel. However, Little Black Submarines, one of the album’s highlights, comes across as a deviation from the rest of tracks. It starts at a slow pace with the acoustics channeling Led Zeppelin and later restates itself back to the upbeat pace of the album’s other tracks.

While El Camino may not be as raw, simple and soulful as their earlier efforts, it’s still a fun album worthy of more than one listen and could be viewed as a solid sequel to Brothers. I would say that this is one of the best rock albums from 2011 — along with Foo Fighters’ Wasting Light. Even if the final words of Mind Eraser says “Oh, don’t let it be over”, there’s the replay button waiting to be touched.

Preview it on Xiami.com | Like it? Buy the album on Amazon | iTunes