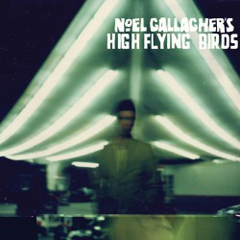 Noel Gallagher’s High Flying Birds tackles subjects such as love and mortality. But when you listen to High Flying Birds, it’s impossible to avoid comparing it with Oasis’ past work. Songs like If I Had a Gun… and (I Wanna Live in a Dream in My) Record Machine come across as hat-tipping towards Noel’s musical past, with the former sounding Wonderwall-esque and the latter resembling All Around The World in terms of sounds and musical structure.

As far as Noel’s vocals goes, they are solid, expressive and melodic, but there’s also a sense of freedom and celebration which can be noticed throughout the album.

Most of the tracks on High Flying Birds sound familiar in structure thanks to its rich wall of sound composed of strings, pianos, chords, guitar and horns. However, AKA… What a Life! stands out for sounding different than the rest of the tracks — it’s a dance-rock song, something Noel hasn’t delved into before.

While the album may not show Noel Gallagher in a raw, stripped down tone — the production values overshadows his vocals at times — his solo album is actually great to listen to due to its consistent quality. High Flying Birds makes listening to Noel Gallagher feel fresh again, re-establishes him as a force to be reckoned with and keeps his songwriting skills and singing vocals intact.

Best tracks: If I Had a Gun… and AKA… Broken Arrow.