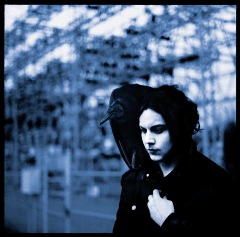 Jack White’s debut solo album, Blunderbuss, seems to have one main theme attached to it: divorce. But is it about his recent divorce from Karen Elson? Does it have to do with former White Stripes partner Meg White? Or is it about another woman from his past? Regardless of who he’s aiming at, it’s interesting to see how Jack White bares himself and pours his pain and anger into the lyrics, resulting in songs that are very personal to him.

Missing Pieces, the opening tracks, deals with a woman that will “walk away, that’s right, and take a part of you with them”. Sixteen Saltines, the second track and the only one that resembles a White Stripes song in sound and aggression, hints at Jack White separating from Meg White for good. The number in the song Freedom at 21 doesn’t refer to drinking at the age of 21, but it refers to a controlling woman from the 21st century who can cause pain to White at any time. And Love Interruption, the album’s first single, shows White’s mixed feelings about love and how he wishes it could do harm rather than good.

I could go on about what the rest of the songs mean to Jack White and how it ties to his main theme, but I’d rather address the other aspect that I loved on Blunderbuss. After the first three songs, White starts to venture into folk, country and blues in a way that he couldn’t do with The White Stripes. The album’s sound in the second half neatly resembles music in the 70’s, with Led Zeppelin being one of White’s biggest influences on tracks such as Hypocritical Kiss and Weep Themselves to Sleep. By the way, anyone remember White working with LZ’s Jimmy Page (and U2’s The Edge) in the documentary film It Might Get Loud?

Jack White has played different sides over the years, but Blunderbuss reflects his mysterious self without hiding under The White Stripes mask as On and On and On reflects.

“The people around me won’t let me become what I need to
They want me the same
I look at myself and I want to just cover my eyes
And give myself a new name.”

Overall, Blunderbuss is an excellent debut solo album that demands you to replay it more than once thanks to Jack White’s musical exploration and how real the music feels. I’m definitely looking forward to his second album and seeing what new theme or sounds he’ll tackle later on.