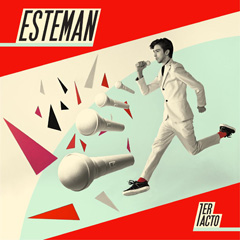 Can the world please stop dividing musicians by the language they sing in? We have Korean hip-hop/rap dropping verses in Spanish, Japanese singers doing Franco-japonais renditions of French staple songs, Spanish-Portuguese crossover songs, and Esteman comfortably sings back and forth in Spanish, English and French with the best of the new Colombian music scene… without ever forgetting the incomparable Andrea Echeverri, of course, in his debut album 1er Acto (First Act).

I have to admit, though, when I first listened to Esteman’s collaboration with Echeverri, I thought I was in for a pop-folk album resembling that familiar Andrea Echeverri sound that had developed into Dos — with a hint of western xD, but what Esteman delivered might exceed anyone’s expectation with his mix of pop and slight electronic influences all into a flavorful Latin wrap, a style that has largely been missing since every new Latin pop artist had been wanting to be the Latin Lady Gaga, continued being romantic baladistas vaguely resembling those of yesteryear, or simply sounding like any other new anglo indie group.

Even the least identifiable tracks, like El Tiempo Pasa or Se Nos Perdió — literally, both songs seem to fuse together in my brain — have a nice pop musicality that could resemble some of Julieta Venegas’ (who, by the way, seems to be a fan too [1]) most chilling songs. But, come on, the genius of 1er Acto seems to be songs like Oh Là Là!, an explosively flavorful collaboration with Colombian group Monsieur Periné (who have their very own tasty debut, Hecho a Mano), transporting you straight back into the world of Sylvain Chomet’s The Triplets of Belleville in a seamless Spanish-Francophone collaboration.

There is even playful lyricism — okay, maybe it’s not lyricism, but there’s certainly play on words and picturesque lyrics in songs like El Pimentón, where Esteman sings to his significant other and describes a red pepper that reminds him of the first day they met. Or El Distractor (which comes with English lyrics in The Actor), with great rhythms that actually reminded me of Aladdin′s Friend Like Me with a name-dropping verse to amuse cinephiles and more:

Esteman, of course, swiftly drops verses in English and Spanish whenever he pleases, going back and forth in The One without ever feeling forced. The album should perfectly close with the apt Log Out — but then there are those two bonus tracks, so… — which coincidentally contains the hook “you f*cking love this rhythm,” and yes — I fracking love this rhythm.

Preview on Xiami.com | Like it? Buy the album on Amazon MP3 | iTunes