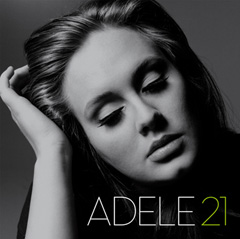 After the success of Chasing Pavements from her debut album 19, Adele is back with 21. In it, the vocals are sharper, the lyrics are more controlled, and the sound seems less raw.

The album opens with Rolling in the Deep, the first single to promote the album. A quite energetic song about a lover that has done her wrong, accompanied with beats, backing vocals and a piano. It then continues with the great beat-driven Rumor Has It, backed with simple “oohs” and a simple hook, and packed with a lot of soul.

The album takes quite a complete turn in Turning Tables, which still contains Adele’s powerful and soulful vocals, but loses the energy that began the record. The song has grand instrumentalization, and it’s big and dramatic compared to the next track, Don’t You Remember, which still has big vocals but is accompanied by acoustic guitars.

Set Fire to the Rain seems a little too produced compared to the other tracks, especially because of the filters in Adele’s voice, which certainly doesn’t need them. However, from the track He Won’t Go on, Adele goes back to simpler instrumentalization and clearer vocals… even in the gospel-y Take It All.

Best tracks: Rolling in the Deep, Rumor Has It