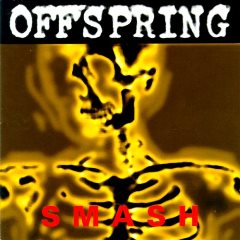 “Ahh…It’s time to relax, you know what that means. Glass of wine, your favorite easy chair and of course, this compact disc playing on your home stereo. So go on, indulge yourself. That’s right! Kick off your shoes, put your feet up, lean back and just enjoy the melodies. After all, music soothes even the savage beast. ”

Actually, don’t take that so seriously because right from the start, a flurry of drums kicks in on Nitro (Youth Energy) and the punk-rock adrenaline ride from Smash takes off in style, allowing the listener to “live like there’s no tomorrow”.

Yes, it’s been a bit more than 20 years since The Offspring’s Smash has been released. I’ll admit that my first taste of them has been through Americana right around the time when Pretty Fly (For A White Guy) [MV] became a massive hit, However, 1994’s Smash has aged very well and its content remains very varied and far superior to anything The Offspring has ever released in their entire career. And due to the album being on its 20th anniversary, The Offspring is playing the entire album live on their current tour. I’m actually jealous of those who can attend their concerts nowadays, but more power to those who can.

Smash is packed with a lot of things, and it’s not just aggresive punk-rock sounds and riffs merely driving it, which are totally excellent thanks to how The Offspring masterfully crafted Smash. Bad Habit is an ode to road rage (and shitty car drivers), while Come Out and Play (Keep ‘Em Separated) tackles teenage violence and Gotta Get Away deals with paranoia, which goes hand-in-hand with Something to Believe In being about disilluson. The Offspring also tackle other issues such as drug addiction (What Happened to You?), unhealthy relationships (Self Esteem) and the world being messed up thanks to government corruption and society (Genocide, It’ll Be A Long Time, Not the One). However, the album’s final track is the one that stands out stronger due to its aggresiveness in sound and full embracing of the punk genre.

In terms of sounds, Smash is pretty raw yet also more accesible to the mainstream world unlike the also great Ignition due to better production values in sounds and more pop-friendly songs, which explains why Smash became not only The Offspring’s breakthrough album in terms of mainstream accesibility (Americana completed the transition to mainstream status), but it also remains as the highest selling indie album of all-time. The variety of their sounds goes from fast-paced tempo songs, Middle-Eastern riffs, a ska song, pop-friendly hits and very strong lyrical content.

But you know what makes Smash really one of the greatest albums of all-time? You can pick any of the songs and apply it to our current world. That might be a great or a bad thing, but one thing is for sure: this is an album that is worthy of endless repeats.

Preview it on Xiami.com | Like it? Buy it on iTunes or Amazon