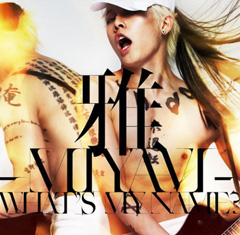 After the birth of his two beautiful daughters, the Neo-Japaneze Samurai Guitarist has made his comeback this year with this spiffy new album What’s My Name?, although Oresama himself would prefer to call it a re-debut album. What we can all agree on is that with this new album and starting the New Year, Miyavi will be embarking in a world tour to spread his unique style of “rock’n’roll”.

Just by looking down the tracklist you can get an idea of how quirky this talented guitarist can be, and that gets double confirmed as you listen to every track on the album. It’s hard to find where to start with Miyavi, so let’s begin with the title track What’s My Name?. The guitar play starts off very western US cowboy style, but quickly escalates into Miyavi’s signature crazy-fast guitar playing, which all of us Miyavi fans love. The vocals though, they’ve always been hit and miss with me. I can’t completely praise Miyavi’s vocals, but I can’t condemn them either because for his style of music, it’s really a befitting way to put out lyrics. This song in particular is very lively, but in contrast to most of the songs on the album are very mellow.

Gravity is almost like sitting down to meditate while hearing Buddhist mantras, although at some point it turns into the perfect insert song for an asylum scene in a horror flick and secretly this might be why I came to love this song. Shelter is the song I’d probably recommend from this album, the guitar riff is catchy as hell and lyrics are jam-in-your-car worthy. Then I’d recommend A-HA if you want to get c-c-c-crazy dancing around in your house… or work place, Miyavi will probably think you’re cool if you do.

Overall Miyavi is not for the faint of heart. His style is very out there, kinda crazy and could probably be misunderstood if heard by the wrong ears. I’d classify his music as experimental rock. Give it a try and then decide by yourselves.