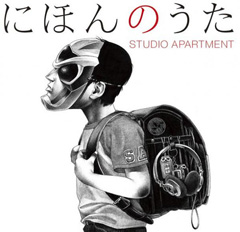 When you begin listening to Studio Apartment’s Nihon no Uta, you think you’re about to listen to some sick beats. The introduction is a part monologue part heavy Taiko battle drumbeat, as if we’re about to watch some historical drama. The catch is, we’re given Miss Universe — the sickest of the sickest beats you’ll find in the singles released this year. It’s also the strangest follow up to the Taiko introduction, but the bridge and the chorus — in charge of Meisa Kuroki — are so contagious that one can’t keep their heads from bobbing up and down.

That’s the thing about Nihon no Uta; as an album it’s got introductions and interludes that connect the whole album together as if they really were a whole. However, musically, these songs and collaborations couldn’t be more far apart from each other — that’s perhaps the point? Trying to show the variety that is the Japanese music scene beyond the commercial sugary “dance” pop one anyone who doesn’t read beyond what’s written on popular online forums and websites — a musical scene where the likes of hip hop groups inhabit the same musical environment as Jpop belters, Jrockers… and Samurai rockers~

This is the reason why Studio Apartment celebrates their 10th anniversary with an electro hip hop album that turns electro dance rock the next, part disco, part Sister Act nun music choir, mixing enough Jpop to weave in those instrumental interludes that might sound misplaced any other way.

Then again, maybe it’s the mostly Jpop songs that may be holding down the album down from continuous music playing — and I LOVE Japanese ballads (when they’re done right!), but in the scheme of Nihon no Uta, it seems to completely throw the mood off the album when we reach Just You, More than Anyone, to then get back on track with Miracle Song, which is also a Jpop song but ends up carrying a little more punch with all the featuring artists adding their own music background to the song.

In the end, the success of Nihon no Uta will rely upon its audience acceptance of all these genres. You know? Because usually those who like rock don’t get along with those who like hip hop… and eventually, they all gang up on those who like pop. If you like the three, you’re in good hands. That’s all I’m saying.

Preview on Xiami.com | Like it? Buy the album on YesAsia | HMV JP Regular | +DVD