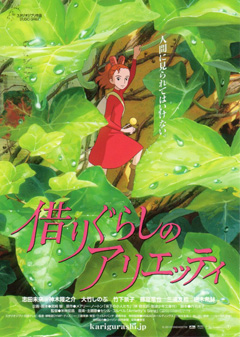 When we talk about Studio Ghibli work, we can always count on having flawless sweeping animation that make it seem so… effortless. Ghibli animation just is, so as a reviewer (who loves animation), I must focus most of my attention on what Ghibli is trying to tell me.

After Miyazaki’s Ponyo, a retelling of The Little Mermaid, a lot of people were a bit skeptic on the announcement of a Japanese adaptation of the English series The Borrowers by Mary Norton — which also got a live action adaptation starring Tom Felton, John Goodman, Jim Broadbent, and Mark Williams.

The Borrower Arriety tells the story of 14-year-old Arriety (Shida), a tiny person — think Thumbelina tiny — known as a Borrower who’s about to turn of age and about to go on her first Borrow with her father Pod (Miura). However, Arriety is an adventurous young woman and has already been out and about, which worries her mom Homily (Otake) sick.

One day, as Arriety is out in the garden, she sees the arrival of Sho (Kamiki) a 12-year-old boy with a heart condition, who immediately spots her in the garden, and wants to establish a friendship with her.

There are various things at play in Arriety, from that ever-present message of environmental protection always on Ghibli films, to the story of a boy who’s mother is never there, and the coming of age of a young woman. When we first meet Arriety, she’s exploding with energy and wanting to go out in the world, explore. Yet, in her journey she learns cautiousness of people that may not be bad, but that are unwillingly  causing damage to her family and her people.

Sho, in his enthusiasm to help Arriety and her family, almost gives poor Homily a stroke and even gets her temporarily kidnapped. But who could blame old helper Haru (Kiki), who always thought was a bit mad when things kept disappearing!

Arriety moves at a steady pace, mixing the on going light drama with some bits of comedy, but there’s always that sense of melancholy. After all, Arriety and her family do think they’re the last of their species, and that this might be their last chance. That is brought up when Sho, half as-a-matter-of-factly and half prophetically, says that Borrowers are an endangered species, and that they are unlikely to ever surge again — at least not at the pace humans do. It’s something that makes the ending a lot more real.