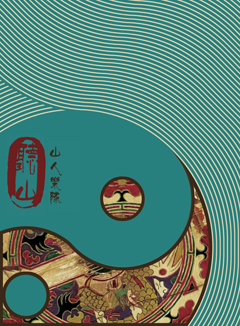 It never ceases to amaze me just how powerful music actually is. It’s transcendental, able to shift between genres like water slipping between rock formations. It integrates itself into every possible environment, allowing the listener to be taken to different places, experiencing different moods and tones. China’s Shan Ren Band is the embodiment of the profound fluidity of music. Their latest album Listen to the Mountain is the perfect representation of how worlds can collide and create something truly magnificent.

Listen to the Mountain (听山) opens much as one would expect, I suppose, if confronted with an album with a title that speaks of great introspection: traditional folk that both enlightens and seems to soothe. Then suddenly I’m slapped across the face with the lilt and sway of Jamaica. Excuse me… what? Amidst the gorgeously rustic sounds of traditional Chinese folk, the band introduces us to its incredible versatility. Track Crab is unlike anything I’d expect from an album which opens up with not only more folk-centered fare but a cappella chanting. It’s light, playful. It’s the type of song that sort of makes you do a double take, turning the track back just to make sure you’re listening to the same band.

Incidentally, it’s this drastic shift in genre that allows the listener to easily transition into the songs that follow. Sniveling Child and Nine to Five exhibit an almost direct integration of the traditional and the Western amalgamation of reggae and jazz — what most know as ska. Shan Ren makes that connection seamless. It almost seems a natural progression, the vocals and instrumentation lending themselves to almost any genre. With the skill and precision of the musicians, each song is open to experimentation and different applications of similar song compositions.

Of course, the Yunnan Province band is no stranger to blending genres, having formed almost 15 years ago with the goal of mixing the traditional with the secular and coming up with something that’s spiritual and introspective but also manages to be raucous and explosive. This is perfectly illustrated with track New Year Celebration. The song literally begins with explosions — fireworks, actually — and uses rock, ska, and light balladry to illustrate the layers and emotions that give the song its namesake. It’s a celebration of sound and music’s ability to transcend genres and create something completely atmospheric and profound.

Listen to the Mountain moves into very emotional fare, bordering on the cadence of a lullaby on the latter half of the album. Using ska more sparsely, the album depends mostly on traditional Chinese folk and elements of bossa nova to close on a softer note (track Retreat Song). Silent World acts as the albums second volta, a track that puts the album in its third act — soothing and melodic. In some ways the transition between each section can be a bit jarring if not perplexing. Shan Ren, however, handles the sudden shifts in tone very intelligently. The transition between the first and second acts of the album is a bit abrupt, but the songs that follow ease the listener into a very eclectic musical experience.

Listen to the Mountain manages to inspire as many emotions as it represents: thoughtfulness, inner peace, brazenness. The shifts in musical composition are well crafted, the songs managing to complement each other and give each listener an unexpectedly brilliant and moving listening experience.

You can listen to the album and get it on Xiami.