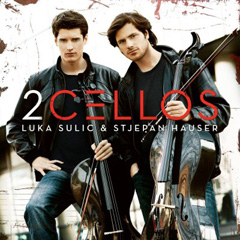 YouTube cello duo sensations Luka Sulic and Stjepan Hauser have had quite an explosive start with their cover of Michael Jackson’s Smooth Criminal. It has allowed them to perform on The Ellen DeGeneres Show, iTunes, and even tour with Elton John, who personally invited them to join him.

Though the whole album is made of covers of popular rock songs, 2CELLOS seems to have struck a nice rhythm for the whole production. Starting with U2’s Where the Streets Have No Name, the album begins with an almost soothing pace that escalates as the minutes go by, ascending in tempo and strength through the following tracks, and hitting a climax with their electric version of Jackson’s Criminal.

The album then switches its energy for a more mellow setting with a rendition of Sting’s Fragile, and follows it with Muse’s The Resistance, which lacks a little bit of the prowess of its original version, but continues elevating the energy once more until we reach our second peak in the album with Welcome to the Jungle — with an equally thrilling music video.

The 2CELLOS album is completed with a “third act” with an equally delicate rendition of Human Nature, once again in a crescendo of energy with Viva la Vida through Smells like Teen Spirit, and making the nearly perfect finale with With or Without You. Well played, guys. One cannot possibly play the album at random because that would be completely crazy.

There is a lot of talk about the popularity of classical music, and efforts are being made to make it more well known — like in cellist Jan Vogler’s collaboration with Korean pop star Rain. With the inclusion of 2Cellos to the music scene and the positive response the duo has received from the public outside classical music fans, we can expect a new renaissance for the genre.

If Lang Lang is the piano rock star, then Luka Sulic and Stjepan Hauser are the perfect cello counterparts.