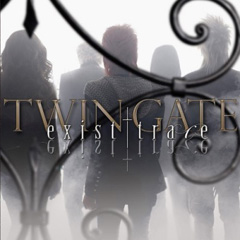 One of the many wonders of being a Japanese Visual Kei fan in the western hemisphere is that one constant comment from family and friends, “Those dudes look like chicks.” Imagine their surprise when I show them Exist Trace and before they can feel thoroughly disturbed once again, I point out, “Don’t worry, these are girls for real.” But these aren’t just any girls. I’m sure you haven’t met girls this fierce since you were bullied by the butch chick back in elementary school.

All girl Visual Kei bands are a rare breed, which makes Exist Trace a jewel among indie visual bands, not that you could tell the difference by just looking at them. Although they’ve been around since 2003 Twin Gate is their first full-length album. To those who are fans of the genre, Exist Trace’s musical composition will sound very typical Visual Kei — fast paced drums, heavy, grungy guitar riffs and low, rumbling bass riffs. What sets them apart for me is their vocalist Jyou. She sounds almost Enka in her style of singing, with a high ranging, rich voice. But don’t be mistaken, she’s also not afraid to go low for an eerie feeling in some songs like Vanguard or scream her lungs out in rage like in Resonance. Also the guitar players Omi and Miko are quite talented. I enjoyed their solos, especially on track number one Decide.

I enjoy their dark music mixed in with that beautiful female flair in the vocals. If you’re into Visual Kei, I absolutely recommend Exist Trace. They’re a breath of fresh air. I also encourage everyone to go see their music videos. Those women are beautiful ~_^