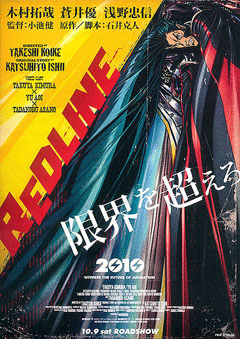 This Japanese animated film comes from the bendy mind of Takeshi Koike, one of the animators of the 1995 animated film Memories and the director of the mind-beding short World Record — you know, the one with the runner who runs to escape the matrix — for The Animatrix.

Having said that, you should know with Redline you are getting your fill of style and substance. Man! What style — you know those car racing epilepsy-inducing sequences in Speed Racer? Redline does all that with pure animation, giving us some of the most dynamic hand-drawn animated flicks we’ll ever get.

The elongated shapes of the bodies as they stretch further and further due to the speed of these races, the slightly deformed characters as their faces get distorted from movement. It might be just too much for some.

But then again, what is an amazing visual fest without a story, right? Redline is set in some universe stuck between times — you’ll get to see anti-gravitational vehicles, robots as well as a Rolleiflex. Every five years, there’s a very important car race — think of it as Wacky Races with colorful but slightly more serious characters — divided by different colors all converging in the final race on Redline.

Kimura Takuya voices JP, a lover of speed who, alongside his pal and handler Frisbee (Asano), participates in racing. The only problem is Frisbee is involved with the mafia and is constantly fixing the races against JP. Then there’s the other brilliant speed lover, Sonoshee (Aoi), whose only dream is to see the finish line of Redline.

While as an audience we’re at the edge of our seat throughout the whole film wondering what is going on and what’s going to happen next, the final bit of the film with some very intense racing feels almost like… a very sexual sequence in which both JP and Sonoshee are working together to get to that very elusive finish line.

My mind, of course, could be making this all dirty. But it just seemed like there was a little too much squishing themselves together, the screaming, and those “almost there” comments… as all the racers explode in some sort of adrenaline ecstasy — please, feel free to contradict me on that one. Then there was the final text screen, which seemed like a very odd — and very cheesy — thing to end the film with.

All in all, Redline is best served for those who love animation… not animated films, just the mere act of animating something. You’ll be delighted with it.

P.S: I should probably point out that there’s one whole extra star just because of the style.