SingerSen – The World in my Eyes 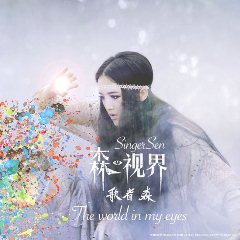 Where exactly can I start? One does not simply talk about SingerSen as if she’s a regular artist. She’s… a spectacle. Indeed, her work and her very presence are spectacular. She manages to create sounds that I think rival even the ice-laden fire of one of my all-time favorite vocalists, Björk.

The hypnotic singer’s debut album is a revelation, a work of electronic art — literally, the sound is all electricity and exposed wire, sparking with the danger and energy we first saw shades of in last year’s Sirens EP. Taking some of its songs with added tracks from the Ghost Street EP, and infusing them with six other tracks, The World in my Eyes is terrifying in its brazenness, having a fearless quality exceedingly rare in most debuts after the 90s.

Opening with Shadows, we are thrust into SingerSen’s world — a space full of hypnotic crashes of sounds into one another. The song bleeds naturally into her debut single Drunk — a song that continues to give me goose bumps — and the title song from her debut EP — an exceptional bit of power pop.

However, once we delve deeper into The World in my Eyes, we get an eclectic mix of power and emotion. The song Ferry gives us a peek into the emotional crack of the young singer, giving us grand traditional instrumentation as well as boundless vocal vulnerability. Matching such tenderness with the grit and bang of Asura seems a bit of a leap in concept in terms of the album’s flow; however, with the awe-inspiring Wolf coming in quick succession, it makes sense.

The leading single from the album, Cables, is another bit of electronic earthiness that saw me fall head over heels like a high school teenager with Drunk. What’s so fascinating about the piece is that it’s the only one of the album that’s entirely in English (English version of Ghost Street notwithstanding). Though it may seem an odd addition, she makes the harsher tones and constructs of the Germanic language seem almost as fluid as the brushstrokes of Mandarin. The tonal coo of the chorus is damn near heartbreaking, so precise. I swear, I closed my eyes and saw the colors that shade her voice, almost melted into the harmonic dissonance of her throaty alto range.

As the album continues the listener is invited to breathe in the breadth of SingerSen’s vocal range and musical versatility. Songs like Singer provide a visceral auditory experience, while Blue Jellyfish combines hard textures and liquid purity to create a fully immersive environment for the listener to play in.

One cannot mention SingerSen, however, without giving credit to Guy Sigsworth. Her work with the experimental producer is a stroke of sheer genius. The two seem to have a seamless chemistry — indeed, Sigsworth’s desire to literally concoct entropy from the ground up meshes brilliantly with SingerSen’s power and vocal bravado.

The World In My Eyes is an exploration of seasons, a dissection of the pearlescent hues of raindrops in spring, the manipulation of the wind in the heady fragrance of autumn. I think what touches me so much about the piece is that it never strays from what I found so fascinating about her from Sirens — it’s raw, honest, and completely malleable, able to bend to fit the shapes and angles of SingerSen’s imagination.

Preview the album on Deezer or Spotify. Like it? Buy it on iTunes or at Amazon MP3.