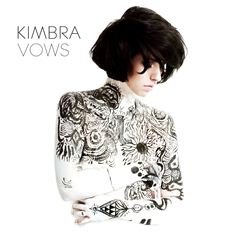 I’m actually almost at a loss for words… almost.

Vows is the type of debut that any young singer would give their reproductive abilities to have been able to create. And yet, this young woman from New Zealand simply sighs and causes a ruckus. She fuses a few genres and bends and twists them into different species, then has the nerve to piece everything together with a vocal perfection that pretty much took my breath away. Quite frankly, this is an album I wish I’d written.

Her almost elfin fascination with vocal layering and grandiose composition takes this artist and this album to another realm altogether. Vows opens with Kimbra’s unconscionable timing with track Settle Down. Her syncopated vocal rhythms are classic in execution; however, there’s something noticeably nuanced about the way she uses her voice. She plays with it, writing music that’s more a playground than a traditional musical composition. Song The Build Up certainly attests to that. It’s a sensual affair that roils with her gritty coo and throbs with heavy instrumentation only to cut off for a full minute. It then creeps back in with lilting hidden track Somebody Please (which stands alone later on in the album). The song’s almost as naked as taking a stroll in a hidden forest, looking for a brook to lie next to.

Kimbra also delves into the “sweet” side of R&B at points. Fusing elements of 90s New Jack Swing and the smooth R&B that I grew up with, Kimbra delivers a sound that’s at once reminiscent and completely different to anything I’ve ever heard. Songs like Call Me and Cameo Lover borrow from the rock and sway of groups like SWV or the early work of Mary J. Blige. Indeed, it’s that same swing and soul that had me falling in love with such music as a child, and I’m shocked and elated to find out that somewhere in the world there are artists who still delight in the simple largeness of the sound.

Every song on this album is a portrait, pictures ranging from sensually painted in blue and grey hues to dangerously chaotic, calling to mind the work of Pollock. However, all that fails to even truly mean anything without the voice. And what a damn voice this girl has. Upon first listen it’s hard to reconcile the age with the vocalist. At 22, Kimbra has a power and range that’s astonishing. And does she ever go for it. She reaches down into her guts to release guttural alto tones that send shivers to bits that shouldn’t be so easily touched, and yet puts her hand in the sky and plucks out stars with notes that seem to force satellites listlessly wandering the cosmos to crash into each other. Songs Withdraw and Something In The Way You Are give honey and rum to the mixture of sweet and charming — I spent the better part of 45 minutes listening to the latter and trying to keep from bursting into tears from the sheer magnitude of the girl’s power. But then you’ve got songs like Come Into My Head that seem to only want to drive the point home — she’s a force like a tornado. She doesn’t care where she touches down, but when she does even the smallest note will cause your world to shift.

This woman’s voice coupled with her ability to fuse the expected with the experimental makes this debut as brilliant as any I’ve heard from some of my favorite artists.

You can listen to the album at Xiami and Spotify. You can buy the album on iTunes or at Amazon.

Note: The tracklisting provided is the full list of songs from the New Zealand Deluxe Edition and includes all the songs intended for the album.