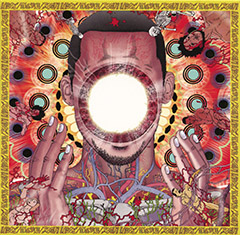 Creatively, music in 2014 was very much about exploring earlier eras to try to find something to expand upon. One could say some artists emulated those bygone eras of musical excellence down to even the construction. Then in October, Flying Lotus decided he was going to take it a step further, bringing in the noise of free jazz and breaking it down to its least common particles. Killing it to bring it back to life again. Thus his latest work, You’re Dead!.

Opening song Theme is just that—a thematic piece of instrumentation and production that’s equal parts interstellar free jazz and FlyLo’s own electricity. This, of course, is fitting considering the next track, the aptly titled Tesla. The dance of a jazz brush across a drum and the powerful bass of Thundercat and legend Herbie Hancock’s keyboard foundation creates a sound that builds as one of Tesla’s everwinding stairs of electricity.

For an album titled You’re Dead!, FlyLo creates a sound so alive and invigorating, one would think there must be a party in the afterlife. The album is full of some of the most expressive jazz. As we’ve come to expect of the producer, he redefines the genre, gives it more scope and daring. The tracks following the first two are testament to that desire to reshape the arc of music.

Single Never Catch Me features one of hip-hop’s most exciting MC’s, Kendrick Lamar. His verse combined with the almost euphoric construction of the track forces listeners into a different state of mind.  Lamar’s contribution is masterful, a powerful exhalation of rhythm and consonance that gives even more pop and snap to the music itself. The theme of the album seems to be kinetic energy despite no longer being part of the mortal coil. If Lamar’s lyric is any indication, this theme is just as jarring as death itself is to mortals: “I can see the darkness in me and it’s quite amazing. Life and death is no mystery and I wanna taste it.” The magic of this song is just how much it embraces death, or rather embraces the idea of being human. He’s so human, in fact, that the eminent nature of death does more to invigorate him than the prospect of immortality.

Thus the rest of the album flows to illustrate the exuberance and nuance of everything around us. His interpretation of jazz—which is really just two steps removed from its origins if we scrape at the surface—means that everything frazzled and wild. However, there’s such a deep emotional sway to every track. Note the exclamation mark as part of the title. It conveys excitement, a celebration even. You’re Dead! is magically wound around fundamental jazz and speared through with the sharp edges of lightning bolts.

The collaborations on You’re Dead! are also exciting. From the aforementioned Herbie Hancock and Kendrick Lamar, to Snoop Dogg and FlyLo’s alter ego Captain Murphy (Dead Man’s Tetris, which also features a cameo from The Joker himself), and the ethereal voices of Angel Deradoorian (Siren Song) and Niki Randa (Your Potential/The Beyond), the album explores each guest artist’s strengths, dissects them to fit every cubic inch of his music until the very DNA of each track is filled to the brim with each contributor’s cellular information.

It may seem I’m creeping over into territory a bit more purple than most would like or appreciate in a review of an album. However, the dissonance and dimension of the album demands it of me. FlyLo’s work on You’re Dead! may not sit well with many who still cling to albums like 1983 or Cosmogramma. But taking apart each track and allowing them to infiltrate your psyche forces you to appreciate the album for its bravado. Creative, electrifying, frightening, and full of so much energy it all but crawls out of its digital confines and begins to dance, You’re Dead! is one of the year’s absolute best.

You can listen to the album on Spotify or Xiami. You can purchase the album on iTunes, Amazon (Vinyl, CD, MP3), or Google Play.