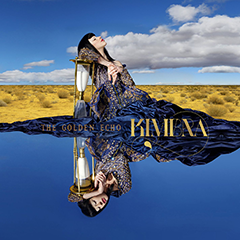 After waiting for three years for the follow-up to her successful debut Vows, fans have been gifted one of 2014’s most impressively expressive albums, Kimbra’s The Golden Echo. It’s clear she spent her musical absence creating some of the most powerful and electric music to come about for quite some time.

The Golden Echo is a striking title. An echo, a diminishing reverberation of one’s voice, suggests that these are ripples from singular moments in Kimbra’s life that have spread. Their potency may have faded, but their effect on her is still felt. The use of audio clips from moments in childhood brings in the image of “golden.” If this symbolizes one’s “golden years,” we can surmise this is an era in life when everything was new and exciting—namely in the innocence of youth.

Teen Heat attests to this idea. It’s a playful song musically, a sound that takes the listener back to days of holding hands and secret crushes. It’s about wanting to know the love of your life on a level that transcends just this human flesh, exploration and need.

We then segue into a track that many found contrary to what they deemed Kimbra’s “style.” Lead single 90s Music is one of those tracks that seems very conventional as far as the current standards of pop music. However, Kimbra uses it as a means to experiment with common sound and bend it to fit her artistic whims. And the album continues in this vein.

Kimbra gives us even more of the same vocal complexity as her debut; however, she pushes her musical boundaries, delving into the reverb effects of electronic music to further build her universe of flashbacks and ripples. None of her sincerity is diminished. In fact, it seems to have manifested itself into something much purer, much harder to ignore.

Her own experiences shade this album with a very personal color. She poses questions she no doubt had to face herself: Just how far does one push herself to keep a relationship going? What does she sacrifice? Tracks like Rescue Him and single Love in High Places reveal that not all memories are as glistening as the gold we wrap them in. There’s crunch and pain in these tracks. But there’s also a desperate need to be someone’s salvation.

Still despite the tragedy that love can bring, Kimbra suggests that it allows us to become unselfish and willing to give our hearts. Songs like Nobody But You and Slum Love intend to portray the unpretentiousness of love. While tracks Everlovin’ Ya and Waltz Me to the Grave suggest even sacrifice can be delicious, can bring us back to our most human selves.

There’s a distorted bend to the music, as if looking into a warped mirror. The arc of the music adds a new dimension to songs that are as simple in theme as they are complex in construction. The hue of each track struck me as familiar, in the same fashion as one of Kimbra’s own golden memories. I felt flashes of Jeff Buckley here. She has the same desire to experiment and play. She carries the same vocal weight as the late troubadour. Her lyrics have the same poetry.

There’s a depth and intelligence to her music. It makes use of what most would consider the traditional definitions of pop, then shreds and stretches those constructs. A twin fondness for Nina Simone and an acute understanding of the artists that have molded her sound—the likes of Prince, Miles Davis, and, yes, a heavy dose of ’90s music—The Golden Echo very much substantiates the musical scope of this Kiwi powerhouse.

The entirety of The Golden Echo reminds us that despite our imperfections, we are as golden as we want to be. We can be the solution or the curse. We can be as giving or as selfish as we please. In the end, however, I believe Kimbra has given each listener permission to be absolutely and completely human, and to embrace all the ugliness and beauty inherent in our humanity.

You can listen to The Golden Echo on Xiami and Spotify. You can purchase it on iTunes, Amazon (CD, Vinyl, MP3), and at the Warner Bros. website.