Van Hunt – On The Jungle Floor 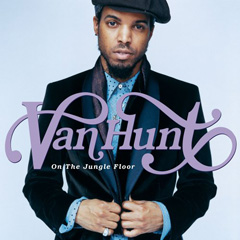 Van Hunt will forever intrigue and mystify me. His breadth of musical knowledge and the scope of his talent is something that most people have failed to recognize. He’s established himself as an artist that others call on to give them perspective. On The Jungle Floor reveals that scope and perspective.

Hunt’s sophomore effort has a depth that extends to the title itself. The “Jungle”, being a conceit for the world around you, also speaks of a guttural and unhinged type of house music. The music of On The Jungle Floor is rich, texturally layered. It’s a world in and of itself, and if you dare walk into it, the music will overwhelm you with its complexity and raw alacrity. Leaving something “on the floor” is a trope for being completely open and unafraid to expose one’s self to the crowds as they pass by, either intrigued or repulsed enough to pass judgment or learn by example.

On The Jungle Floor is more than just a treat for the ears. It’s a three-course meal, providing equal parts soul, R&B, and alternative. He’s a generous artist, one who exposes his desires and thoughts with nuance and fearless poetics, as in opening track If I Take You Home (Upon…), a song reminiscent of Prince’s If I Was Your Girlfriend. He’s playfully introspective, intelligently nasty. As the album progresses we note Hunt’s influences range in scope from Prince to Sly and the Family Stone (No Sense of Crime) to the likes of groups like Blondie or Talking Heads (At the End of a Slow Dance).

Lyrically On The Jungle Floor tangles Carl Phillips-esque poetry and autobiographical exposé to allow listeners into the mind of its artist. Songs like Daredevil, Baby and Hole In My Heart give Hunt an emotional arc many artists are afraid to explore for fear of leaving themselves too vulnerable or either appear too self-involved for fans to connect. The album follows this pattern: clever and experimental composition mixed with raw lyricism that’s equal parts diary and confessional.

Van Hunt also understands the importance of observation. His “jungle”, as it were, is overrun with humanity, all aspects of it painting the universe in different hues of blue, purple, orange, and sometimes grey. Much of the album is his personal experience with everything around him, but he writes the lyrics in such a way that one would have to force themselves to pay close attention in order to unpack all the delicious imagery (Being A Girl, The Night is Young).

A track he originally commissioned for Cree Summer’s 1999 debut album Street Faerie got a reimagining for On The Jungle Floor. Mean Sleep (featuring the explosive vocals of Nikka Costa) is one of those tracks that turns the tide of the album and makes it something richer. The tracks that immediately follow (Priest or Police, Character) attest to that, bringing even more emotional acuity to the sensual fearlessness of the album’s first half.

On The Jungle Floor manages to bring a number of genres and influences to create something that seamlessly explores themes of sexual desire and introspective observation. As a piece of work, it’s not flawless and to many may even be a bit self-indulgent; however, Van Hunt’s  brazenness and ear for different genres marks this as one of the most intelligently crafted albums to come out of the early 2000s.

You can listen to the album on Xiami or Spotify. You can buy the album at iTunes and Amazon (CD, MP3).