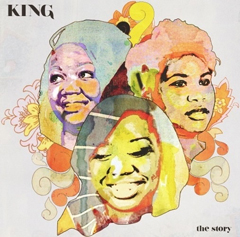 It’s very rare that I come across an album that’s pretty much perfect, especially if said album only consists of three tracks. But, lo and behold, the three ladies of KING (twins Paris and Amber Strother and friend Anita Bias) released their debut EP two years ago, and the buzz surrounding it had the industry on notice. Everyone from producer/pianist Robert Glasper to Prince sang the group’s praises, citing them as one of the most incredible groups in the last decade. Their sound is fresh, intoxicating, and abundantly clever.

The Story is simple enough — three songs that are meant to introduce the world to the trio from LA. However, the depth, precision, and artistic clarity of the piece is simply astonishing. Taking elements of jazz and R&B, the music is ethereal, unlike much of anything that’s being released today. Vocally, there isn’t any overexaggerated melisma, no booming declarations of vocal dominance. Each track is smooth and velvety, loose and controlled. As such, listeners easily absorb the sound, make it very much a part of their spirits.

Lead single and title track The Story is just that — a fairy tale, a journey to a faraway place where butterflies reside and everything is sunshine and beauty. The beat is steady and chugs along persistently as a locomotive, transporting the listener and elevating the group to planes of unexpected majesty. The lyrics speak of fearlessness, a positive message of finding one’s soul and not being afraid of what she’ll find: “I don’t worry what tomorrow will bring. I don’t need no second thought. It’s my heart I’m following.” The following tracks deal more directly with love and how deeply one feels it, from the very core and all the way through her being. Track Supernatural is a celebration, horns and handclaps giving depth and exuberance to the overall experience — “And if you feel the way I do, you think that I make magic too, we’ll disappear into eternity”. Meanwhile, track Hey is a precious melody, coaxing everyone within hearing distance to reach within themselves and find the golden string connecting them to the ones they love.

And while the lyrics of The Story are meant to be universal, the music is intricate, powerful, and incredibly intelligent. The vocal arrangements redefine harmonics, erring more on the cerebral side, if there is such a thing. It’s smart composition that manages to connect with the parts of the brain stimulated by sound and light. Thus the music is truly a mind game, a round of hide-and-seek or flashlight tag. It ignites certain parts of the mind and connects them directly to the soul.

KING is an enigma. These women are full of joy and elegance, and they’ve managed to infuse their sound with that elegance, bringing sophisticated music to the masses and allowing us a chance to experience something truly magical. The Story is another one of 2011’s mythical debut albums. It left me speechless the first time I listened to it, and I’m just now recovered enough to put color and form to the thoughts and emotions that left me awestricken and inspired two years ago.

You can listen to The Story on KING’s Soundcloud (The Story, Supernatural, Hey) or Spotify. You can buy the album on Amazon and iTunes.