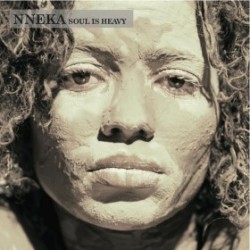 Nneka has always been a lioness of the industry, raising the collective consciousness of a world wrapped in its own corruption. Her voice is powerful, her lyrics raw. She gives the soul a mirror in which to see its own imperfection, at which point we can either change it or realize that there’s beauty in its intrinsic shortcomings.

Soul is Heavy is split between the socio-political arc that her previous albums have taken and the ever-present heartache of love. It’s no surprise that at 31 Nneka has chosen to explore all sides of humanity rather than chastising its many pitfalls; however, that doesn’t detract from her strong and unapologetic approach to living within the confines of a very predictable, but nonetheless gruesome, human circus.

Tracks like Lucifer (No Doubt), Camouflage and title track, Soul is Heavy are as brutal and honest as her most brazen tracks from her début album Victim of Truth. Nneka peels back the layers of her voice, giving way to guttural and native purrs of strength, outrage, and an unequivocal desire to free the mind.

While her heavy tone sets the pace of all of her work, there’s an intelligent introspection that Nneka reveals in songs such as Restless, Do You Love Me Now, and Don’t Even Think. Her lyrical content is able to weave between the political and the personal, each song able to identify with a variety of messages, but her croon for understanding the pain of love is so obvious that every soul can crawl into it and feel something powerful.

Though some tracks like Shining Star err on the side of more radio and consumer friendly, the album as a whole is personal and honest, a deeper look into the heavy soul of a deeper woman.

Standout Tracks: Lucifer (No Doubt), My Home¸ Restless, Stay, Soul is Heavy, Do You Love Me Now, Valley, Camouflage