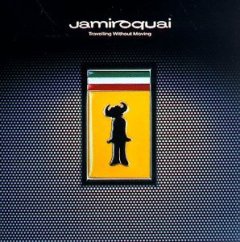 There couldn’t have been a better example of what 90s music was about than Jamiroquai’s third album Travelling Without Moving. It took the best of funk, mixed it with a heavy dose of soul, and topped it off with a smattering of pop. However, what’s most remarkable about the album is that despite its 90s pop appeal, it still remained one of most mature pieces of music to come out of the decade.

Starting with the fire and wit of the band’s previous albums, Virtual Insanity was Jay Kay’s answer to the never-ending technological change that whisked away organic life and replaced it with cold steel and clinical precision. The songs that follow are all a testament to the band’s artistry and love of their craft, ranging from the all out funk of Cosmic Girl to the mellow grooves of Alright.

In an almost humorously expected twist in the middle of the album, Jay follows his ode to the fast time of life on the road (song High Times) with a Reggae-tinged tribute to Jimmy Cliff (of The Harder They Come fame) with Drifting Along.

Travelling also marks Kay’s return to soothing balladry. Listeners got a glimpse of his sensitivity and sense of the romantic with Return of the Space Cowboy‘s soul-infused lover’s groove Half the Man; however, with tracks Everyday and Spend a Lifetime, Kay gets downright sensual, allowing his aching vocals a chance to soothe while his composition and simple vocal arrangements put a reverberating burn in all the parts of a lover desperate for deep touch.

Then the album becomes transcendental with two didgeridoo tracks. Following these with a track that opens with Kay recording the sound of his Ferrari shifting from F4 to F5 may seem a faux pas, but title track Travelling Without Moving is as musically intricate as the rest of the songs on the album.

Really the magic of the album, as with the two prior to and the one following Travelling, has much to do with the chemistry between Kay and his unconscionably talented bass player Stuart Zender. The bass boy wonder is in elegant form on this album, adding grace and precision to the depth and funk of Jay Kay.

As the band’s most successful album to date, Travelling Without Moving may have marked a step to something a bit more mainstream; however, the fact remains that the album is a shining beacon of the class and style indicative of the band. Jay Kay’s precision as singer, composer, writer, and producer belies the natural raw grit of the band itself. As my second favorite Jamiroquai album, Travelling took the elements of the band that I already respected to an untouchable level, cementing them as my favorite band of all time.