Toro y Moi – Anything in Return 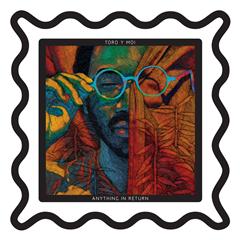 Imagine the sun on your face as you lie in the grass, hands behind your head, eyes closed. Suddenly the skies open up and you find yourself covered from head to foot in a heady deluge. It should chill you, but instead it spreads warmth and a surprising freshness. Listening to Toro y Moi’s — pen name of wonder kid Chaz Bundick — latest release is the same sort of contradiction of sensations. It’s all warm feelings and lazy bursts of refreshing energy making stilted journeys across your skin.

Anything In Return opens in much the same way as the first day of spring: creeping with energy in the morning, then exploding with activity as the day proceeds. The first few songs of the album carry the same elegant laziness throughout, a sort of intelligent ease and focused chaos that marks Bundick’s music.

It can seem a bit overwhelming if one tries to focus too closely on anything other than the melodic reverberation of each song. From the first two tracks you get the sense that Bundick is determined to take you through complicated throughways, highlighted with crashing sounds and a mash-up of auditory stimuli. However, third track So Many Details seems to be his way of acknowledging the complexity of his sound, even offers you an out should things become too intense for your sensibilities: “Okay, I’ll take you back.” But if you’ve stayed this far, you’ll be able to stomach the rest of the maze without too much auditory trauma.

And ultimately that’s what Anything In Return feels like: a traumatic experience, sounds seeming to crash into one another, blasting any listener in the periphery. The album’s flooded with experimentation, Bundick no stranger to the broad range of synthesized sound. But it’s the scope and grandeur of it that compels me to appreciate it so much. There are tracks on this album that seem to envelope the listener in a brilliant sunshine that can seem a bit too much on the eyes (Harm in Change, Never Matter); however, for the most part the album is full of tracks that are almost soothing if you simply close your eyes and let the experience wash over you.

There are truly some gorgeous tracks on this album, so beautiful, in fact, it’s a wonder where Bundick gets his sense of vision. His understanding of the world around him seems to stem from some sort of yellow and purple-tinged dream he had one day while lying on a park bench. You get the sense that you’ve been wrapped in his fantasy at some points (Rose Quartz, Studies) and at others you feel as though he’s attempting to seduce you to stay in his dream to live out the rest of your days enveloped in its blue haze (Touch, High Living, Grown Up Calls, Day One).

Toro y Moi’s is a sound that must be explored and sampled, studied and appreciated. Though there seems to be an arrogant overabundance of experimentation underlying many of the tracks, the fact remains Chaz Bundick is a truly gifted artist. He gathers the organic matter of sound to create music that’s exceptionally large. He keeps his voice and the lyrics understated so you can see just how brilliant he is, and for the most part he succeeds.

You can listen to the album at Xiami and Spotify. You can purchase the album at Amazon in MP3 format or as an audio CD.