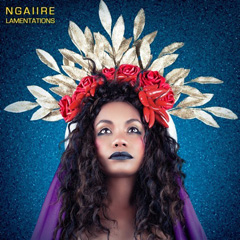 Australia’s version of (never ending) singing competition American Idol, aptly titled Australian Idol, gave us an unbelievable level of talent through its six seasons. One of its most memorable and unique is Season 2’s Top 30 contestant Ngaiire Joseph. She released a single at the end of 2005 but is just now releasing her debut album, the oddly introspective Lamentations.

Ngaiire is an imp of a woman, her voice playful and coquettish with just the right amount of grit to teleport her distinctive sound to another stratosphere. Lamentations opens with that peculiar drawl and timbre. Track Uranus is quite an opening statement, lyrics prodding into the subconscious of a young woman searching for her place in the universe. What follows is a deluge of quirky sounds that combine both the earthy and otherwordly.

At its core, the sounds on Lamentations are elemental, very simple and unpretentious. But the overall quality of the music is large. With Sydney-based musician Tim Curnick taking the helm as producer, it’s no surprise the music housed on this ambitious debut is anything other than stellar. His work is brazen, so bold it’s almost hysterical. His previous work is mostly as a bassist for various artists; however, Ngaiire seems to have given him the excuse to reach for something truly explosive, expanding the musical universe and taking us on a melodic trip.

However, what makes the album so incredibly enticing is the way in which this complex and deliciously experimental production blends so magically with Ngaiire’s vocal. Hers is a voice that’s equal parts sweet and spicy. It’s got that grit that makes most soul singers nowadays so powerful when they take a step back from the polish of the music industry, but it’s also tinged with an angelic sweetness that allows for both elements of sound to work so brilliantly together: the earthy and the ethereal.

Lamentations has moments of absolute beauty, moments where even quiet spaces are filled with yearning (Count to Ten, ABCD), and still there are moments that are so purely soulful you wonder where it all comes from (Fireflies, Ordinary). With leading single Dirty Hercules, she set the bar pretty high, introducing herself to the world at large with a haunting lilt and sway in her voice and lyrics that are equal parts playful and emotionally raw. Ngaiire’s all-around sound is unique in that way that seeing snow in the desert is unique: it’s rare, but when it happens it’s one of the most beautiful phenomena. However, her contemporaries can be discerned and siphoned from her sound: artists like Nneka, Feist, and even the likes of Björk.

What’s particualarly striking about Lamentations is just how powerful each auditory image is. You can reach out and swear you could touch her soul. She allows her voice to direct wayward and tempestuous emotions, almost as if she were attempting to purge herself of something, a wound both deep and open. It’s a very sentimental album, which may turn some people off, searching for something a bit more than heartache. But, of course, that would mean they missed the message from the very beginning. Ngaiire promises us her lamenting heart, and she delivers it precisely and without pretense.

You can buy Lamentations at iTunes.