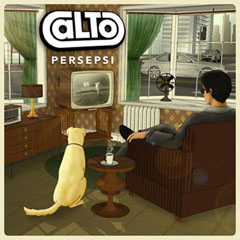 It never ceases to amaze me how limited my musical scope is (thanks, Amy). Coming from Indonesia, pop/R&B artist on the rise Albert Tobing, known by his stage name aLTo, has been making quite the proverbial splash in the typhoon that is the music industry. His debut album comes to us after an already impressive start to 2013 — placing third for Malaysia’s MTV music award for Best Pop Act and releasing his first music video.

Perspepsi is a surprising debut. It has unexpected class and sophistication and decidedly elegant vocals. With a nod toward late 80s and early 90s R&B and Soul, aLTo imbues his debut with pure musicality and unwavering emotion. Admittedly, it’s a very Pop album, reminiscent of the likes of Remy Shand and even sprinkles of Usher’s earliest music.  It’s upbeat, romantic, and his vocals are elegant. Lead single Cuma Kamu is the perfect introduction, enlisting a mature groove, strong vocals, and earnest emotion.

It’s quite a clever tactic to use the EP format for his debut. In the span of six songs, the listener can gauge the power of the young man’s vocals. The six songs offered on Persepsi are actually quite diverse. While opening track Benar Untukku and Cuma Kamu both lean more toward the pop/dance end of the spectrum, the following tracks focus more on the clarity of aLTo’s voice, the passion he infuses in each song. Karena Aku Cinta is a gorgeous ballad, paying tribute to the likes of Michael Jackson (songs like You Are Not Alone) and Brian McKnight in tone and emotional openness. On the other hand, Kau is just lovely, a romantic lullaby played during the first soft rainstorm of April.

Still, track Rasa Yang Pasti is heavily influenced by the likes of Luther Vandross (tracks like Love Power) and even the Pointer Sisters (I’m So Excited), very energetic pop/soul that expresses the jubilance of finding love. The song that closes Persepsi (Untuk Senyuman) seems to be an amalgamation of the tracks before it, being at once a power ballad and a musical celebration. The music is emotional, using a big sound to carry the softness of aLTo’s tenor range.

It’s obvious aLTo borrows from classic R&B canon; however, his sincerity and emotion is honest and lacks pretense. He doesn’t attempt to go for more than what’s within his range, keeping his voice light and lilting on most of the tracks. Unfortunately, that does make Persepsi stagnant, lacking any real adventure or sense of fully showcasing the singer’s range. He stays mostly in high tenor/falsetto for most of the album’s songs, not venturing into his lower register or even exploring the possibility of something a bit more adventurous vocally.

That being said, Persepsi is a delightful debut album. The sound is crisp, the vocals mature and easy to digest. But I think the scope of aLTo’s voice has yet to be fully realized. If his mini-album is any indication, it’s a clear bet that Albert Tobing is an artist who’s sure to make a huge mark musically in the next couple years.

You can listen to Persepsi  on Soundcloud. You can buy the album on iTunes and Amazon.