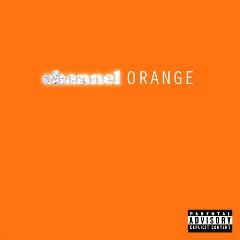 I’ll be the first to admit that when it comes to the modern trend of R&B I’ve been left feeling more than a bit underwhelmed. I’ve found my life’s inspration in those artists who have very loose connections to mainstream radio, thus being entranced by such prophets and poets as Van Hunt and Vikter Duplaix. However, every once in a while somebody slips through.

Truth be told, I know very little of Frank Ocean, but if channel ORANGE is any indication of his musical path, the whole world is in trouble. Artists like the two mentioned above have provided lovers of music something ethereal to grasp on to; however, their magic has evaded a greater proportion of the mainstream audience. Ocean has managed to break through the stronghold of certain pink-haired pixies and lamentable half-talents without being any less poetic.

channel ORANGE seems to be an album paying homage to the delicate balance between art and commerce that many artists have had a hard time grasping. His lyrics hold a profundity that’s hard to believe lives inside the heart and mind of a 24-year-old. What’s even more striking is the way he houses those lyrics. The music is mystical, bordering on completely abstract. It’s almost saturated in synthesized, orchestral movements, which is then juxtaposed to live instrumentation — compliments of the technical brilliance of Ocean’s creative partner, Malay. It’s nothing revolutionary, insomuch as synthesized music is something that’s been done since the 60s and rehashed until almost physically abused in today’s music. However, Ocean’s ability to live within that music, thus elevating it to an almost metaphysical plane, is what puts his sound in stark contrast to anything else.

Thematically, there’s also nothing particularly earth shattering. But the lyrics therein are complex and cerebral. Ocean manages to take familiar themes — sex, pharmaceutical escapism, and, if I can be so bold, the size of his cock and balls — and wraps them in something less bravado and more self-discovery. Songs like Pyramids and Sierra Leone glorify the sexual human form in the same breath that they manage to praise it for its ability to mold to different stimuli and be a conduit of an emotional spirit. While songs like Pink Matter and Forrest Gump give consciousness and depth to the self-same themes of self-discovery and exploration.

Vocally, there are moments when Ocean’s lilting falsetto drips into a lazy rap cadence; however, even that moves from simply being a slow, almost tired hiccup to a beautiful extension of his singing voice. Throughout the album he allows the music to speak for itself in songs like White (with guitar elegance from John Mayer), varying song lengths — from just over a minute to just shy of ten — to enhance the overall sensual ebb and flow.

Frank Ocean’s début is bold and unassuming, thus its overwhelming fearlessness. This green moment in his career is blinding, searing the listeners with something they’re unaccustomed to. What I would give to have this moment captured in amber, never losing its elegant shape and always staying awe inspiring. His voice, his candor, and his unapologetic manipulation of music and minds have stamped him as one of my favorite artists of the decade.

You can listen to the album at Xiami. If you like it you can buy it at Amazon or on iTunes.