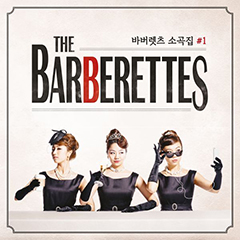 Every once in a while Korean pop music surprises me. It’s not often, and it usually happens on the periphery of what most would consider “traditional” K-pop. However, when I am surprised, it’s usually a shock that makes me redefine and question the standard by which I, as well as any other fan of Korean pop music, should hold the genre. The Barberettes are one such group. A trio of crooning belles with voices and a style that’s at once unique and nostalgic.

The group swoops in on the wings of ’60s doo-wop and adds a bit of franco-jazz to the mix to bring us their first album, aptly titled Barberettes – Mini Album #1. It’s a simple affair, but the vocal construction is powerful and unparalleled, especially considering K-pop’s musical landscape. Opening track Little Gals is a spritely tune, simple in composition—an acoustic guitar and a piano accompanying the tight vocals the group provides. It sounds like spring and speaks of the playful flirtations therein: When the little gals gather their heads and sing a song, all the boys in town, their hearts start to pound. They come listen to the little gals. This, of course, sets the tone for the rest of the album, and what a treat it is.

The Barberettes are a blessing to Korean music, taking it back to a time when everything was about the music, about giving the gift to the world and spreading the joy of it everywhere you went. Vocally, they’re very reminiscent of groups like The Andrew Sisters and The Shirelles. It’s classic and smooth, unfettered with anything too overtly ostentatious. While K-pop is full of girls and girl groups with big voices, the women of the Barberettes rely on subtlety and the profundity of their harmonization to make the music soar.

Songs like A Midsummer Night’s Dream and Heart of Love, which open on gorgeous a cappella verses and end on pleasantly beautiful harmony chords, illustrate the fullness of the sound. Meanwhile, tracks like Kukerichoo and If the Rain Comes show the group for all its boldness and undisputed sass.

While the Barberettes aren’t as well-known as they should be at this point, the release of their first mini drives home a very serious point: Korean music is so much more than the gloss of their idols. It’s soul, blues, a bit of jazz, and can be vocal perfection.

This trio of incomparable women takes some of their original work and work that’s more familiar (as in their rendition of the Hawaiian blues of Mrs. Lonely) to compile a debut album that’s singular yet incredibly diverse, a gust of fresh, clean wind while still being utterly timeless. They could quite possibly be the Korean reincarnation of the fictional (yet nonetheless legendary) Triplettes de Belleville—a clean sound that harkens back to the smooth vocals and classic simplicity of doo-wop and lighthearted jazz. With hope, we can get more of this vocal splendor in the future.