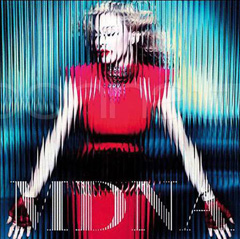 Madonna’s latest album, MDNA, is quite the comeback, especially after the lackluster Hard Candy. This isn’t to say that everyone will like it on the first listen, as certain tracks take some getting used to, but it’s an album worth listening to.

MDNA lacks the consistency and flow in track-style that something like Confessions on a Dance Floor has, but the experimental nature of some songs is appealing. Gang Bang, in particular, will throw many fans of Madonna off at first, but after a few listens, one will likely imagine themselves driving down the highway while shooting their enemies. It’s fun, it’s violent, it’s sexy, and it’s definitely a stand-out track.

The singles so far, Give Me All your Luvin’ and Girl Gone Wild, may seem like your more generic pop songs, but it’s almost impossible not to get them stuck in your head — even simply with one listen. They may not be the best, but they’re certainly not the worst on the album.

On the other hand, Masterpiece is entirely out of place as the closing track. It’s a good track, but one that should have been left simply on the W.E. soundtrack. The weakest track of them all, however, has to be Some Girls, which does barely anything for me (or anyone I know), and fits onto the album as much as Masterpiece does. It’s easily forgettable and something that should have been scrapped. Instead, Beautiful Killer (included in the deluxe version), would be much better suited to be featured rather than either one of those two tracks.

There’s just something about Madonna singing about getting shot down and having a gun in her mouth that makes for a good song. Yay, metaphors!

Another stand-out track from MDNA has to be the beautiful Falling Free, which almost seems straight out of Madonna’s Ray of Light. Speaking of Madonna’s past, anyone that hears I’m A Sinner will have a hard time denying that it’s the perfect companion piece for her famous Beautiful Stranger [MV]. While Turn Up the Radio proves to be the most catchy track (and a personal favorite), as well as the most likely to blast in your car with the windows down.

Many will agree that MDNA takes some getting used to, but once you warm up to it you won’t be able to stop. With this simple album, Madonna proves that she’s still the queen by maintaining her own style while also adapting to the new world of pop music.

Preview on Xiami | Like it? Buy it on Amazon or iTunes