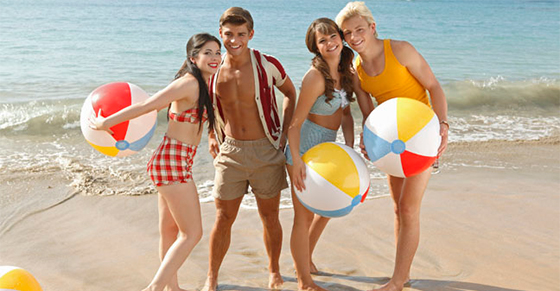 Disney Channel Original Movies have a bad reputation. However obscenely ridiculous some of them might be, sometimes you get one that’s just plain charming, but that doesn’t happen often and especially not when it comes to musicals. In a post High School Musical world, Disney has kept dishing out musicals, but they’ve all been as flat and boring as the one that came before. More often than not, they’re simply vehicles for whatever pop star they’re trying to give a boost, and that’s fine; Harvey Weinstein does it all the time for the Oscars.

The latest of Disney’s wild musical endeavors comes in the form of Teen Beach Movie, a title that only describes one minor portion of the movie it represents. Teen Beach Movie is equal parts sixties beach party, gang musical, and awkward sci-fi b-movie. If that sounds like a mess, it’s because it is one, but it’s also a relatively self-aware mess that can actually be pretty dang entertaining at times.

Teen Beach Movie follows two high school sweethearts, Brady and Mack (Ross Lynch & Maia Mitchell), who end up falling into a sixties beach party film known as Wet Side Story. You read that right; not West, but Wet. To ensure that the fictional film ends the right way, they’ll have to unite the fake film’s two protagonists in love, stop fighting between bikers and surfers, and simultaneously stop some villains who are trying to take over the beach by controlling the weather.

From the minute they arrive in this musical world, it’s clear that director and choreographer Jeffrey Hornaday has seen a lot of musicals. There’s clear inspiration in the musical numbers from Grease, West Side Story, Hairspray, Rocky Horror Picture Show (Barry Bostwick sadly doesn’t get his own number though), and even those elaborate Busby Berkeley numbers we all know and love. For all those inspirations though, few of the songs are actually good and memorable.

If you can imagine a world where every character John Waters wrote was stripped off all their raw trashiness and turned into Disney caricatures, you’d have the people in this movie. The only two who can be said to have done anything good with their roles are Maia Mitchell and Grace Phipps, the latter of which looks like a young Alison Brie at times and is one of the two protagonists in the fake film.

Teen Beach Movie is often bland, but smack in the middle, it rises into about thirty minutes of pure glory after a song that acknowledges just how self-aware it is. This meta number, titled Can’t Stop Singing, is a genius little bit about the real world characters being trapped in a musical and not being able to stop singing. The number makes Mitchell and Lynch move around and sing like puppets in the most endearing way. It’s an impressively catchy song that launches the film into a such a genuinely enjoyable stretch that sadly doesn’t last until the end, but is almost enough to overlook plenty of the negatives in the film.

As messy and flawed as it is, Teen Beach Movie‘s love for musicals, smart choreography, and genuinely enjoyable nature help make it something that isn’t nearly as bad as one might think. It’s fun, self-aware, and likely could have been a great movie with some different writing and acting.