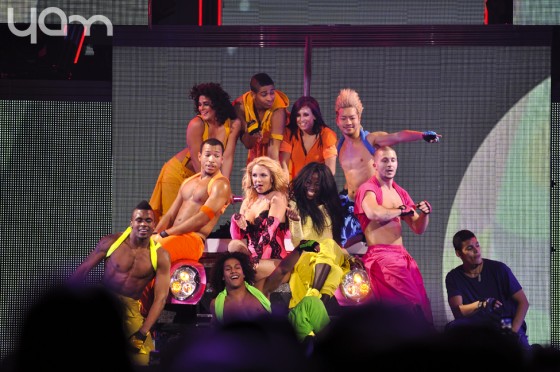 I have never been a true Britney Spears fan. However, maybe I’m crazy, but I feel that her latest album, Femme Fatal, is one of her best. Sure, there is more autotuning and the lyrics aren’t the best, but the music fits the standard of the current pop music scene.

During Britney Spears’ brief visit to Sweden, part of her Femme Fatal Tour, she managed to play one concert in Malmö and one in Stockholm. Hopefully, Britney didn’t read the reviews the critics wrote in the newspapers after the first show in Malmö, since they weren’t very nice.

I have no idea if the Malmö show was as “terrible” or if “half of all the seats stood empty” like they wrote, but from what I saw it seems like the critics were a little unfair to the former Pop Princess. When the photographers were escorted to our place, I managed to get a glance at the audience. They were happy, singing along to her songs and had that amazed look on their faces that describes a sort of respect for the show and for Britney herself.

Truth be told, I wasn’t very impressed with the music, but the show was really cool. During the short period of time that we were allowed to shoot the show, Britney (and her dancers) managed to change clothes three times. The stage theme was also changed — first from a colorful street to a red and yellow Egyptian theme, where Britney looked like Cleopatra in some sort of a boat.

According to the organizers at the Globe arena, almost all of the tickets were sold. Whether you had a ticket to the parquet or a seat in the balcony, it’s pretty likely you would have enjoyed the show.