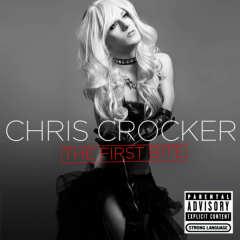 But, one glance at his YouTube page portrays not a different Crocker. Just an evolved one – like a high-level Pokemon. He’s paradoxically sassier, classier and super effective at provoking his haters, via his Tranny-type persona.

Surprisingly (or not), Crocker has released a catchy pop number: debut Mind in the Gutter, flashed in dizzying production, could have easily been a leftover from Britney Spears’ Blackout.

On The First Bite EP, CC tries so hard to be Britney… so very hard. Her effortless mix of sexual ferocity and baby doll innocence sounds horribly forced on him. Awash in auto-tune tech, Crocker comes off as an amateur Britney drag queen.

Lead single Freak of Nature plays like a more current Piece of Me, with Crocker’s ‘voracious’ vocal technique (and there’s a video too!). He really, really means what he’s singing atop all those angry electrosynths and staccato vocal edits. Fly Swat is the infamous dubstep rap track that made waves of fans rejoice. It’s hardly anything affective, but CC fires back at his haters above an impressive electro-dubstep beat – the Transformer-y whooshes and whizzes surprisingly don’t sound camp or cheesy. But Crocker totally does.

That’s not to say The First Bite is a waste of space; production is up to speed on their modern electropop abilities. It’s actually quite impressive – these hard-hitting Britney demo-sounding tracks are coming out of the Crocker repertoire.

Dear Chris Crocker’s producer, give your mildly entertaining melodies to any other semi-talented, breathy vocalist (ie: Britney Jean Spears?). Not to CC’s grating whine. Let him stick to his horrifyingly hilarious YouTube videos. That’s a more appropriate use of his heavy charm.

Whether you like it or not, you can get the album on Amazon.com | iTunes