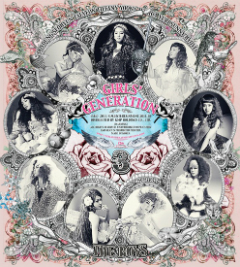 To be quite honest, I am getting sick and tired. I thought that SNSD were growing away from that “sugar-sweet” sound, but The Boys continues the trend with tracks like My J, Telepathy, Say Yes, and VITAMIN, and it makes me want to rip my hair out. Not that the tracks are bad, but when you come with a strong, dark, heavy track such as The Boys, I don’t expect to hear bubblegum-pop on the rest of the album.

But as I said, this is something that SNSD has done before, so I shouldn’t be surprised.

What surprises me is that some tracks (My J, Say Yes) have this 60’s sound. I wasn’t expecting that, so I went a little whiplash when I heard them. It’s new for SNSD, but I am not sure if it is a path they should be walking down. Kpop has already a handful of girl groups that rely on the retro sound, and it is getting boring quite fast. After all, SNSD’s strength has always been that they have been able to start the trends, not follow them.

However, there’s a sound development in tracks such as Oscar, TRICK and Top Secret. Great tracks with a darker electronic sound, a more mature feeling. Had the album been filled with this kind of track, then it would have been a great album. But with the lack of a proper red-thread throughout the album, SNSD still has to prove what they really go for. They can’t keep on relying on just one track to carry an entire album — word on the street is that the fans are getting tired of it.

SNSD is set to expand into the American market, but I am not so sure if an album like The Boys would sell well there. I think it is a bit too sweet for the American taste.

Preview on Xiami.com | Like it? Buy the Normal Version | Japan Version | Korean Version + Poster on YesAsia